Philip Berry jumped at the chance to take his dream job. 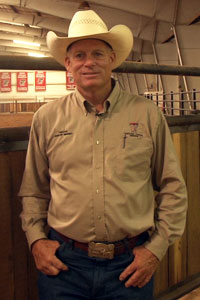 Everything Philip Berry knows has to do with horses. When his dream job came open at Texas Tech University as the school’s rodeo coach, he jumped at the chance.

Berry took his new position July 1, after an 11-year stretch as rodeo coach at New Mexico Junior College in Hobbs. Housed in the Department of Animal and Food Sciences, Berry leads a team that, in 2012, brought home the first women’s national collegiate title in school history. Since those students have all graduated, he has his work cut out for him.

“I grew up on the family ranch in Eunice, New Mexico, so I have been in the horse business forever,” Berry said. “I was riding from the start and started rodeo when I was 8. Texas Tech has always been my goal, my dream job.”

But the rodeo part of the equation is not what excites Berry most about being on the Texas Tech team.

“The education aspect is what I love,” he said. “It’s a D-1 school; it’s a major university. There are 15 schools in our region and Texas Tech is the only Division I, and that’s what attracted me here.”

Before beginning his coaching career, Berry spent 20 years participating in rodeo, from junior to collegiate rodeos and for the Professional Rodeo Cowboys Association (PRCA).

Berry earned his bachelor’s degree in animal science from Sul Ross State University and qualified for the College National Finals from 1974 through 1976. His awards include the Southwestern Region Champion in the National Intercollegiate Rodeo Association (1976), and “Rookie of the Year” in PRCA Steer Roping (1986).

Texas Tech hosts its own rodeo in mid-October, and Berry said the students run the entire thing themselves.

“It costs us about $30,000 to put it on, so the students are out pounding the streets for sponsorships. If they come knocking on your door, please help them out. They plan it, they work it; I guide them a little bit, but it’s all students.”

And, Berry said, he has a very diverse cross section of kids on the team. He named nursing and engineering students in addition to many animal science majors.

“We have students from California, Virginia, quite a few from Colorado, and even one from British Columbia, Canada,” he said. “They’re from everywhere. They’re in it for the education, and Texas Tech has rodeo scholarships, which is a way for them to get their education, so Texas Tech is the school they want.”

He reiterated that the education is his first and foremost focus for the team members.

“It is a tough sport; it is a very expensive sport. We pay our own fees, we supply our own horses, our own trucks, our own trailers – very few people make it from college into the pros, so they’d better get an education.”

Berry’s family includes Aetna Bess, his wife of 34 years, who goes with him to every rodeo and also is very involved with the students. His younger daughter Amanda graduated from the Texas Tech University Health Sciences Center in speech pathology and is at University of Houston working on her master’s. His older daughter LaRae is the facility director and event coordinator for the Mallet Event Center in Levelland.