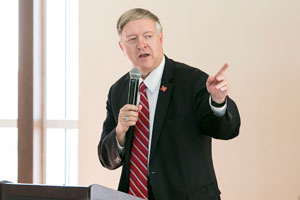 “The State Employee Charitable Campaign assures an easy, efficient and consistent pathway for state employees to contribute to the charity of their choice,” Texas Tech President M. Duane Nellis said. “The campaign is more than just giving. It’s an opportunity to learn about the community and increase awareness and understanding of the issues we all face in Lubbock, the surrounding community, and virtually every community in our nation.”

This is the 20th SECC Texas Tech has participated in, beginning with the first campaign in 1994.

At the event, attendees met with 30 different agencies that benefit from the donations made to the SECC. Organizers presented highlights from last year’s campaign and handed out departmental awards.

Last year, Texas Tech employees – with 33.8 percent participation – gave $431,865, or 103 percent of the university’s goal. That amount contributed to the $980,964 total donation by the Greater West Texas SECC.

“There are more than 500 different local, state, federal and international charities,” Abercia said. “They range from small human health organizations to large philanthropic organizations. If you have a passion for it, we have a charity you can give to.”

The campaign supports a wide variety of charities and causes, ranging from small local organizations to large and well-known national and international groups. According to the university’s SECC website, charities that wish to participate must meet stringent legal requirements, and then be scrutinized by teams of state employees to ensure:

Employees can decide to participate as a leadership giver by donating $1,000 or more. Other standards used in the campaign include giving one percent of annual pay (Lone Star Gold level) or one hour of pay per month, calculated as .006 of an employee’s annual salary (Lone Star Red & Black level). Lone Star members will receive a mug and two tickets to a Texas Tech athletics game.

Abercia said employees are encouraged to give what they feel is appropriate for them and their budget.

“The SECC is an important part of giving back to our community,” Abercia said. “Any amount that our coworkers can give to help out it is greatly appreciated and has a profound impact on the lives of so many.”

The SECC website has a wealth of resources available for everyone, including the campaign brochure, a mini-directory of charities, the deposit summary report for paper pledge forms and one-time gifts, the campaign calendar with all events and reporting dates, and the campaign video.

Texas Tech participated in a statewide campaign which donated $9,485,384.40 to charitable organizations all around the country. Texas Tech's donation was 2.5 percent higher than the contribution made in last year's campaign.

A New Habitat for All