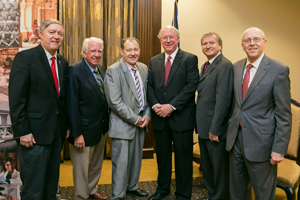 As communities worldwide seek to improve their natural resources, Texas Tech University has appointed a renowned water quality and quantity researcher as inaugural holder of the Donovan Maddox Distinguished Engineering Chair. Danny Reible has led groundbreaking efforts in the assessment and management of risks as they apply to contaminants and surface water.

“The J.F Maddox Foundation and the Maddox family are extremely excited about the appointment of Dr. Reible to this chair,” said Jim Maddox, of the J.F Maddox Foundation of Hobbs, N.M. “Our father was very proud of Texas Tech and very appreciative of the opportunities his degree from Tech afforded him. He would have been especially pleased that the initial holder of the chair named in his honor has expertise in issues related to water, a resource that is so critical to our region.”

Reible was introduced Tuesday at a news conference and reception at the McKenzie-Merket Alumni Center. The event also included remarks from Al Sacco, dean of the Whitacre College of Engineering; President M. Duane Nellis; and Chancellor Kent Hance.

“Thanks to the generosity of the Maddox family, Texas Tech welcomes another member of the National Academy of Engineering to its faculty,” Hance said. “I look forward to his contributions to our esteemed engineering program.”

Reible is the fourth National Academy member on faculty at Texas Tech’s Whitacre College of Engineering, two of whom are Maddox chair holders. Election to the National Academy is considered one of the highest professional honors among engineers. He was elected in 2005 for the development of widely used approaches for the management of contaminated sediments.

“We are extremely fortunate to have Dr. Reible join our faculty,” Nellis said. “His influence in the field of environmental and water resources will help Texas Tech build on the many strengths that already exist in the Whitacre College of Engineering.”

Reible is a fellow of the American Association for the Advancement of Science and the American Institute of Chemical Engineers (AIChE). He received the L.K. Cecil Award from AIChE in 2001 and the Malcolm Pirnie Frontiers in Research Award from the Association of Environmental Engineering and Science Professors in 2011.

His research is focused on the fate and transport of contaminants in the environment, particularly the applications to the assessment and remediation of contaminated sediments and the sustainable management of water resources.

“I am mindful of the serious condition of water resources in the state and nation and hope that I can assist in ensuring that all Americans enjoy water with appropriate quality and in sufficient quantities to meet current and future needs,” Reible said. “Texas Tech has incredible resources to address the cultural, socio-economic and technical challenges of our water resources and I appreciate the opportunity to contribute.”

Jack and Mabel Maddox moved to Hobbs, N.M. in 1931, where Jack began a lifelong business career in the utility industry, among other interests. He was also a civic leader with a special interest in youth programs and higher education. Jack and Mabel established the J. F Maddox Foundation in 1963 to serve the residents of southeastern New Mexico. The foundation has benefited Texas Tech in many ways over the years, including a competitive scholarship program that was initiated in 1996, and awards five scholarships annually to high school students in Lea County to attend a university or college of their choice. Fifteen Maddox Scholars have attended Texas Tech.

The Donovan Maddox Distinguished Engineering Chair and the Jack Maddox Distinguished Engineering Chair each have an endowment balance of more than $9.2 million. Both were created to enable Texas Tech to recruit to the university renowned engineering scholars to dramatically accelerate the development and/or enhancement of a specific program or programs within the Whitacre College of Engineering. Outstanding faculty leaders selected as the Maddox Chairs are expected to advance the research mission of the college and the university and to have significant impact on their reputations for excellence.