Mysterious decline in quail population prompts the largest research project of its kind. 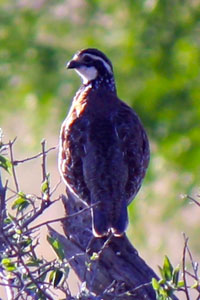 The well-worn, topless Jeep pulls out of the carport by the horse barn and starts down a dirt trail flanked by sage and mesquite.

As the wheels bounce over the sandy terrain of his 6,000-acre quail ranch in Stonewall County, Rick Snipes starts out seeking the familiar and iconic bird call. The ranch sits in an area known for some of the nation’s best quail hunting.

Only 7:30 a.m., and already the air hangs heavy with heat on this bright, June morning in West Texas – a harbinger of the strangling temperature to come. Weathermen have warned to prepare for 105 degrees on this day, and Snipes wonders how lucky the group will be at tracking its quarry.

He pulls into a meadow and shuts off the engine. Sitting silent for a bit, the bird rings out and heads turn to detect its location.

“That’s a beautiful sound,” Snipes says as he scans the ground. The call is close, and the brown-and-white bird appears from the grass close to the Jeep. Numbers have improved slowly this summer, both on his ranch and in other parts of the state. But they’re still nowhere near the anticipated bumper crop of 2010 that seemed to almost vanish prior to the opening day of hunting season.

In June of that year, Snipes said so many quail called in the mornings that he couldn’t even tell how many were in the area. For the past 20 years, the former insurance executive cleaned up his over-grazed patch of Big Country and sculpted it into the perfect quail habitat. It seemed all his hard work paid off, and he awaited an excellent hunting season by October. 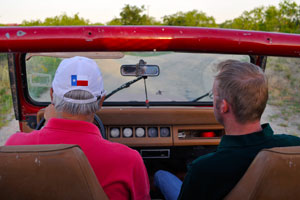 Snipes travels by jeep over rough terrain in search of the elusive bird.

By August, the silence was deafening. The bobwhite had evacuated Snipes’ feathered Eden. Stumped and concerned, he checked with other ranchers around him. They, too, had lost their birds. It made no sense, he said, because his carefully planned ranch had sustained so many bobwhites only a few months prior.

Soon, hunters, landowners and state officials realized they had a population crisis on their hands. Throughout the Plains region of Texas, Western Oklahoma and even into Kansas, quail had flown the coop. Some estimated between 70 and 90 percent of bobwhites had disappeared.

Not only did this mean bad news for the birds, but also rural areas that cash in during quail season would feel the negative economic impact. Quail hunters in Texas spent an average of $8,600 dollars in pursuit of quail in 2010, and half of that was spent in the destination county, according to a Texas A&M Agrilife Extension survey of quail hunters in Texas.

The Rolling Plains Quail Research Ranch (RPQRR), of which Snipes was a founding member and is now the current president, responded to the crisis. The ranch’s foundation receives private donations from quail hunters and Park Cities Quail, a Dallas-based conservation organization.

The organization originally was conceived to fund science that would help landowners better manage the quail on their property. Then, studies done in 2009 and 2010 at the research ranch found high levels of parasitic worms prior to and during the population decline. That prompted the ranch’s foundation to recruit scientists from Texas Tech, Texas A&M and Texas A&M-Kingsville Universities to discover other possible causes that might play a role. 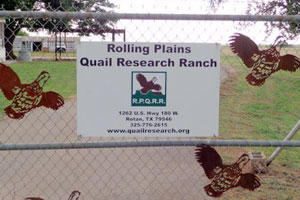 This culminated in a historic effort to examine the role of diseases and parasites in the decline of quail.

Dubbed “Operation Idiopathic Decline” as a nod to doctor-speak for a decline of “unknown cause,” the ranch’s foundation has given a total of $2.75 million to fund the project. About half the proceeds have gone to The Institute of Environmental and Human Health (TIEHH) at Texas Tech.

Scientists began looking for answers on 35 ranches or wildlife management areas located in 25 counties in West Texas and 10 in Western Oklahoma, as well as at the RPQRR’s 4,700-acre ranch near Roby. Project organizers estimate the total coverage area of this study includes about 19 million acres of land.

In the past two years, scientists have collected data from 647 birds. While the answer still remains elusive, some of the factors they discovered in the largest quail research project ever undertaken have surprised them and landowners alike.

The good news is that populations in most areas have appeared to make a small rebound during the summer of 2013, the scientists say. Results from this summer’s collections and research could be the most telling of the three-year effort.