Texas Tech researcher says the songbird could fall prey without a change in behavior. 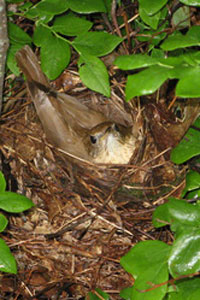 Texas Tech researcher studies how these birds modify their behavior at dusk.

“When the sun hits the ground and the owl’s been around, veeries nary make a sound.”

It’s a familiar quotation you’ve never heard before, but one buoyed up as a modern truism thanks to recent research conducted in part by a biologist at Texas Tech University.

Kenneth Schmidt, an associate professor in the Department of Biological Sciences at Texas Tech, worked with Kara Loeb Belinsky, an assistant professor of biology at Arcadia University and former post-doctoral researcher at Texas Tech, to study how predators and prey eavesdrop on each other and modify their behavior at dusk. They found that when veeries hear an owl in the neighborhood, their flute-like songs fall silent.

They published their findings in the peer-review journal Behavioral Ecology and Sociobiology.

“I got the idea for my study after reading a book chapter on how katydids changed their mode of communication from air-borne to vibrational during a full moon,” Schmidt said. “This is, presumably, because bats can detect the air-borne signals. I knew veeries sang long after sunset and presumed that owls may be able to detect and thus locate and prey on singing veeries. If true, veeries should modify their song behavior in the presence of owls.”

Veeries are small, reddish-brown thrushes with spotted breasts that live in the forests of Canada, the Rockies and the Eastern United States. Though capable of other songs, they’re named after their distinctive vee-er call. They scrounge for berries and forage for insects on the forest floor. Often, they make cup-shaped nests on the ground under shrubs and migrate to South America in the winter.

Songbirds, such as the veery, leave themselves open to predation when singing at sunset, Schmidt said. While much research has been done on the morning’s avian dawn chorus, little is known about the interactions of evening birdsong. 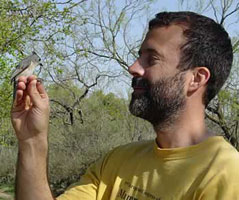 Schmidt and Belinsky studied the birds’ behavior at the Cary Institute of Ecosystem Studies in Millbrook, N.Y., where Schmidt has studied veeries since 1998. In an area known to have three pairs of owls, the scientists observed the veery behavior after playing recorded owl sounds into the forest.

They discovered that veeries, which normally sing an hour after sunset, actually reduce their singing for up to 30 minutes after hearing the owl recordings. Sometimes, the sound of an owl would cause the birds to shorten the length of their songs as well as the time of their dusk choral performance altogether.

“We were excited about the results, since no one had really focused on predation costs of singing in birds,” Schmidt said. “A few have, but certainly not at dusk and not otherwise diurnal birds singing at dusk. Was I surprised?  Not overly. Predation risk really does alter prey behavior in so many ways – the ‘ecology of fear’ as it is called.  So, I was expecting it would work. Still, it was just an idea and needed to be tested to either confirm or refute our hypothesis.

“We suspect veeries may be altering their singing behavior and song structure in other ways that are, perhaps, more subtle and harder for humans to detect. Currently, we are testing some of these follow-up ideas.”

Schmidt has conducted this type of research in the past, including discovering how ovenbirds and veeries eavesdrop on chipmunk chatter to find safer neighborhoods in which to raise their young.