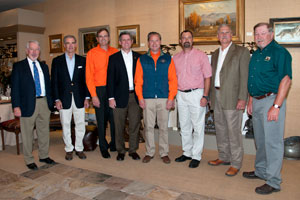 The award was part of $770,000 awarded to eight programs focused on declining wild quail populations and represented a new record for the 7-year-old group.

The grant funds were given during a check presentation party Aug. 7 at Collectors Covey in Dallas.

Grant recipients are doing research to improve quail numbers as well as to try to explain why the crop of quail that appeared abundant in the beginning of 2010 suddenly disappeared at an alarming rate before hunting season began.

However, the bird’s numbers have dropped for decades. Northern bobwhite numbers nationwide totaled about 31 million in 1967. According to the National Audubon Society, the numbers totaled only 5.5 million in 2007 when the organization labeled the northern bobwhite the No. 1 common bird in decline.

At The Institute of Environmental and Human Heath at Texas Tech, Ron Kendall, a professor of environmental toxicology and Steve Presley, an associate professor of environmental toxicology, both received awards totaling about $133,700. Kendall’s $65,700 will fund a project looking at how a fungal toxin on corn used to feed deer may impact the birds, while Presley’s $68,000 award will expand work on identifying intermediate hosts of a parasitic eye worm found infesting Rolling Plains bobwhites.

“This grant enhances even further our ability to acquire information on what quail and the Rolling Plains are being exposed to that may result in mortality or other effects such as suppression of the immune system,” Kendall said. “This will help us fill some additional data gaps. A lot of this work is integrated, so we can assess multiple factors impacting quail and assess strengths of the factors as potential culprits that have resulted in large-scale quail declines.”

Brad Dabbert, an associate professor at Texas Tech’s Department of Natural Resources Management, received $110,000 for a supplemental feeding project that targets improved methods that will successfully work with the birds in Texas

“For some reason, supplemental feed hasn’t worked at all in Texas,” Dabbert said. “We’ve got a couple of years of new data and are working on a new technique of applying feed that appears to work. It’s going to help us basically increase survival and reproductive success of quail in the wild.”

The contributions for the research were made at Park Cities Quail’s fundraiser in March, which draws 1,000 sportsmen from across the country and has become known as “Conservation’s Greatest Night,” a nod to the nonprofit’s unique fundraising formula, said Joe Crafton, Park Cities Quail chairman.

“In addition to being the social event of the year for area sportsmen, the generosity of our members means we can lead the nation in supporting conservation research and education,” Crafton said. “We are getting tremendous bang for our buck by partnering with universities and wildlife research organizations in this region that leverage leading wildlife specialists, doctoral students and graduate assistants who provide thousands of hours of research in the field and analysis in the lab. This has resulted in some of the most important quail research to date, directed at one goal - restoring wild quail to their historic huntable population levels.”