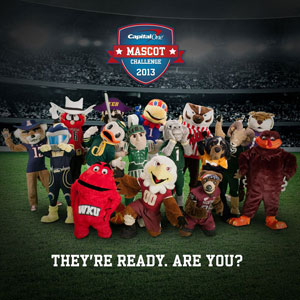 Raider Red, Texas Tech University’s costumed mascot, and the reigning Capital One National Mascot of the Year, will defend his title in the 2013 Capital One Mascot Challenge.

The upcoming contest also features new challenges involving Facebook and Twitter. Aside from the previous ‘click-and-vote’ option on capitalonebowl.com, Capital One is providing fans two additional ways to support their favorite mascot. Fans can show love for their mascot by completing the weekly 25-point challenge and posting it on Facebook or Twitter. A weekly 100-point challenge is a true test of mascot pride; upload the required photo or video as evidence and Capital One will add 100 points to that mascot’s total.

In 2012 Red took second place out of 16 mascots in regular-season voting to contend for the most votes nationwide; he then faced the first-place and undefeated Cocky the Gamecock from the University of South Carolina in the final round.

The Capital One National Mascot of the Year is determined by Internet voting and additional social media challenges. Twelve weeks of regular-season voting end Nov. 24 with playoffs beginning the following day, including quarter-final, semi-final and championship voting weeks. The winner will be announced during the 2014 Capital One Bowl (Jan. 1). Each of the 2013 participants also will receive $5,000 for their university mascot program.

The 16 contestants are selected by a panel of judges from Capital One from among the mascot entries received from all eligible NCAA Football Bowl Subdivision and Football Championship Subdivision schools.