The 2013-2014 series will host an eclectic group of artists this season.

“The series enhances the cultural landscape not only of Texas Tech, but also the Lubbock community,” said Jo Moore, series administrator. “It’s going to be an eclectic and interesting season, presenting an amazing opportunity for the South Plains to experience outstanding world class performers.”

Tony Kushner, a Pulitzer Prize-winning playwright of “Angels in America,” begins the series 7 p.m. Oct. 25 in the Allen Theatre on Texas Tech campus. Kushner is an Academy Award-nominated screenwriter for Steven Spielberg’s “Lincoln” and is a 2012 National Medal of Arts recipient.

The event, titled “A Conversation with Tony Kushner,” will be facilitated by Mark Charney, chair of the Department of Theater and Dance.

Performing Nov. 15 will be the avant-garde string quartet Sweet Plantain. The group specializes in genre blurring, fusing Latin, classical, jazz, hip-hop and improvisational music. The musicians blend the classical traditions they were trained in with hip-hop, jazz, and Latin rhythms to give voice to a sound that is contemporary and multicultural.

The spring season begins with the nationally acclaimed dance company Parsons Dance Feb. 14. Under the direction of dancer and choreography David Parsons, Parsons Dance has a collection of more than 80 American works. The company has been featured on PBS, Bravo, A&E Network and the Discovery Channel. 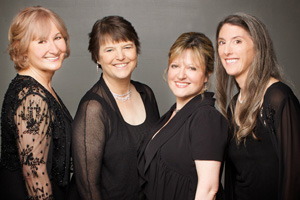 Anonymous 4 , a female cappella quartet, known for their ensemble singing, performs March 25. The group recently celebrated their 25th anniversary and has 21 best-selling recordings.

All lectures and performances are at 7 p.m. in the Allen Theatre on Texas Tech campus. General admission individual tickets are $18 and are available through all Select-A-Seat locations. Call (806) 770-2000 or visit www.selectaseatlubbock.com for more information. Season tickets can be purchased for $75.

Texas Tech students receive one free ticket for each event with a valid Texas Tech ID at the Student Union information booth located at the entrance to the Allen Theatre.

Community outreach for these programs was funded in part by the Sybil B. Harrington Endowment for the Arts of the Lubbock Area Foundation.