A lab at TIEHH is dedicated to studying various environmental factors impacting the quail. 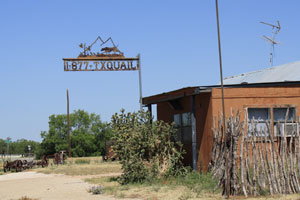 Quail population decline may be attributed to more than just habitat.

With the number of birds plummeting, the RPQRR shifted gears and funded Operation Idiopathic Decline to discover some answers. In the project, researchers from TIEHH, RPQRR, Texas A&M and Texas A&M-Kingsville collect and share data with colleagues at other institutions.

Dale Rollins said such a huge project could not have been accomplished without adequate funding, the academic expertise from the three universities and logistical support. Many landowners permitted scientists access to their lands for research. The Oklahoma Department of Wildlife Conservation proved a valuable partner for study sites in the Sooner State.

Normally, when researchers study population decline, the mantra is to look solely at the habitat.

However, Rick Snipes, Rollins and others suspected more than environment had caused the rapid decline. Not every part of the state experienced the same problems from the drought. On Snipes’ ranch, where every available resource quail need still abounded, habitat shouldn’t have been the problem. The team wanted to discover if disease or toxicants might have played a role.

Snipes and Rollins met with Steve Presley, an associate professor of environmental toxicology, and Ron Kendall, director emeritus at TIEHH and professor of environmental toxicology. After touring the facility and discussing the scientific talent base available, Snipes said if Texas Tech would build the lab, the RPQRR would fund the program, donating $550,000 into the lab itself.

TIEHH’s unique attributes as a lab dedicated to environmental toxicology made it the perfect place to study what may be impacting the quail, Snipes said.

“The lab at Texas Tech was a seismic advance from where we started,” he said. “A centralized receiving lab where sampling could be coordinated and tissue samples could be collected, catalogued, archived and disseminated to the researchers was essential.” 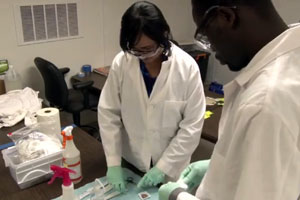 A lab at TIEHH is dedicated to studying various environmental factors impacting the quail.

“The quail populations in West Texas, which has been very important as a species of interest for hunting, have dropped precipitously over the last few years,” Kendall said. “We do not think it’s entirely habitat- or weather-related. We think it’s some parasite, disease, contaminant or something to cause such a dramatic drop. In some parts of the Rolling Plains of West Texas, there may be up to 90 percent or more drop in populations. Historically, this area has been one of the great bastions of quail populations in the nation and in Texas.”

Presley, a zoonotic disease researcher in charge of the central receiving lab and disease studies at TIEHH, said researchers at Texas Tech haven’t found a silver bullet yet. But they don’t expect to find just one. In 2009, scientists at Texas Tech discovered some quail populations had exposure to West Nile and Newcastle disease viruses. He suspects many factors culminated the decline.

“With this funding, we’re going to expand the scope on our quail population screening for diseases spread by insects and ticks,” he said. “Diseases, such as West Nile virus, may compromise quail health enough that they don’t reproduce as well or can’t escape predators as well. We’re going to expand our research to determine if quail decline is related to arthropod-borne disease.”

Senior scientists and graduate students trap and collect a vast array of data from bobwhites during August and October each year, Presley said. Most are weighed, measured and have blood drawn and other samples collected. About a quarter of birds sampled are sacrificed and flash-frozen for complete necropsy back at the central lab in Lubbock.

“The central lab has a fleet of mobile laboratory trailers that we send out with the teams,” he said. “All of the samples have a code to identify where they came from and the date collected. Sacrificed birds are necropsied at TIEHH to assess general physical internal condition. All the organs are extracted, examined and weighed. 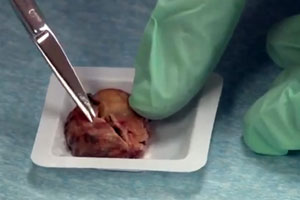 Researchers analyze quail tissue to identify the cause of the population decline.

So far, scientists have found interesting evidence of lead, mercury and pesticide residue in some of the tissues, Kendall said. Heavy metals in the bodies of the quail could cause lowered immune systems. That, paired with parasites and viruses, could be responsible.

“Lead in the femur bone and mercury is being seen in some of the quail muscle tissue,” he said. “In many of the birds, we see the residues of DDE, which is the residual of DDT. These are some of the early signals of the things going on. One of the most interesting things that we’ve seen is the presence of eye worms, which are parasites that occupy the eyes of quail. What is interesting is that we see a significant number of the quail in the Rolling Plains with eye worms. In South Texas, almost none are seen. There are various investigations going on to see what this means. We’re getting reports of quail flying into fences and flying into buildings or hitting cars and a lot of times we’re seeing eye worms. These worms could impair the birds’ ability to escape from a predator or find food.”

Rollins said scientists also found high numbers of cecal worms in the lower gut of the quail. While these parasites aren’t thought to be overly dangerous, the unusually high numbers found in birds from the study could impair digestion, especially in the winter.

More science is needed, Presley said, though he thinks the data collected will be able to answer what has caused the recent drastic population decline and also may help scientists understand the decades-long slope in quail numbers.

“Operation Idiopathic Decline’s initial phase was a three year survey to go out and trap quail, analyze tissue and then move to another phase of research.” he said. “The ultimate goal is to try to identify what is causing the decline, what is causing it over the past 20 years. We want to look at it and determine if disease is playing a role. When we find that, then we can take the next step which is how can we limit that disease, toxicant or parasite. Once you know what the problem is, you can address it.”