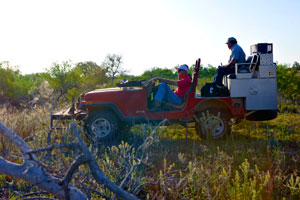 Dale Rollins, director of the RPQRR and a professor with Texas Agrilife Research, sits in the back of the Jeep and mimics the distress call of a fledgling bobwhite.

The former national quail-calling champion waits less than a minute before a male comes to investigate. Puffing up to protect his young, the bird approaches the vehicle closely looking for the problem.

These birds aren’t just specimens to him, but part of a way of life, he said. Rollins has researched the birds since 1978.

“I was raised in Southwestern Oklahoma,” Rollins said. “One of my earliest memories of quail is when I was just 5 years old. We lived south of Hollis, and about this time of year, there was a bobwhite quail whistling its iconic song. My mother said, ‘You hear that? That bird calls its name. ‘Bob-white.’ And it’s been calling to me for the last 53 years. They were the only game we had in Southwestern Oklahoma at that time. So, my personal life and my professional life have been guided by quail and quail hunting. I find myself as a researcher that is a hunter first and researcher second. The same skills can make you a good hunter and researcher.”

Sustaining quail populations in West Texas served as the impetus for creating the RPQRR, he said. Established in 2007 while quail numbers in the region were still high, the assembly of landowners and quail hunters realized the overall decades-long population declines from the Atlantic Coast to East Texas served as a cautionary tale.

In their 2007 State of Birds report, the National Audubon Society ranked the northern bobwhite quail at No. 1 on a list of common birds in decline, citing an 82 percent drop from 31 million birds in 1967 to about 5.5 million at the time. 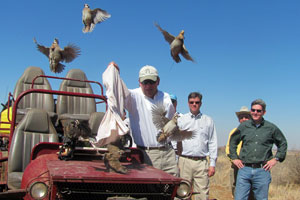 In Texas, the bobwhite decline averaged 5.6 percent a year between 1980 and 2003, with a loss of 75 percent. Blue quail have declined 66 percent during the same period with a 2.9 percent loss per year.

Quail hunting and hunters in Texas also have declined precipitously with only 50,000 hunters bagging about 500,000 quail in 2010 compared to 98 million birds bagged by 321,000 hunters in 1960, according to the Texas Parks & Wildlife Department.

The research ranch, formed in the nick of time it would seem, serves as a laboratory to devise and evaluate land management schemes aimed at enhancing bobwhite abundance.

When the RPQRR began operating, Rollins and others worked on the various factors that affect quail health. The team studied the impacts on quail caused by small mammal populations, insect populations, predators and other factors.

Then the crash came, and the team was stumped. The drought in 2009 could have contributed to some decline, but the rains of 2010 seemed to have revived population counts. It did for a time, he said. Then the bottom dropped out. People began calling Rollins by December, saying they had found dead quail on their properties.

“Finding a dead quail out in the pasture is a little like finding a needle in a haystack,” he said. “They don’t last very long. I probably got 10 reports of folks finding a dead quail that December. That raised our antennae that maybe it was happening more than we think.”