For Rick Snipes, the hunt is as much about the relationship with his dog as it is the bird. 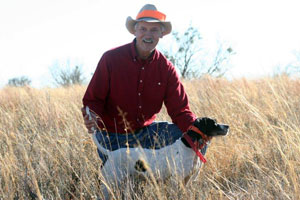 Snipes also keeps a kennel, where he raises bird dogs.

For Rick Snipes, nothing beats quail hunting. Inside his home, photos and paintings of bird dogs line the walls. On one table, a lifelike carving made from one piece of wood portrays a hawk sitting on a fence post, quail in talon.

“Most of the people whose friendship I really value I met through a dog, a bird or a shotgun,” Snipes jokes as he sits in the shade of his porch.

For him, it’s not so much about the bird as it is about the hunt and the relationship between man and dog. Snipes also raises bird dogs and has a kennel with 10 pointers and one setter.

“The magic for a quail hunter is the dog,” he said. “The bobwhite has an endearing characteristic, which is that it usually will hold for the dog. Bobwhites exist in a covey. So when you find one, you find 15 or 20, and they behave for a bird dog and that is what makes the bobwhite special.”

Reared in South Carolina, Snipes grew up hunting quail. That was back when quail populated the state in numbers large enough to be hunted, though. Since that time, the birds have vanished due to human encroachment and habitat change.

That loss of habitat and hunting opportunity is what drove Snipes and his wife to buy a ranch in the Rolling Plains of Texas. Here, save for the barbed wire, cattle and loss of the buffalo, the land has remained relatively unchanged, and vast numbers of the birds thrived. 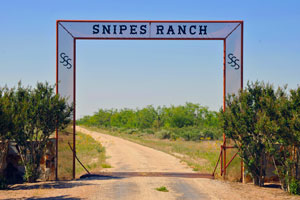 Snipes' home is at the end of a dirt trail flanked by sage and mesquite.

“The ranch, when we first bought it, was probably typical of West Texas ranches in the Rolling Plains in that it was characterized by ‘subsistence agriculture,’” Snipes said. “It was radically overgrazed and overgrown with brush in certain places. But at the same time, birds were everywhere. What that tells you is that we were living in a rainy period. A nice rainy spring forgives almost all poor land management, it seems. What we did was look at the ranch and say, ‘What can we do to make it a better habitat for quail and for people?’”

He started by taking every cow off the land for six years and allowed the native grasses to flourish. He thinned some of the brush, which in turn freed up more water for the grasses. Then, he kept a small herd of cattle to graze at high intensity for short periods to emulate buffalo.

“The number of birds on this ranch defy belief most of the time,” he said. “From 2001 to 2008, we averaged finding five coveys an hour in good weather or bad weather, and the birds were eating purely natural feed. That is remarkable in this day and time.”

For 2010, it looked like an unprecedented crop of birds inhabited Snipes’ ranch. Each morning the air rang with their calls, and Snipes couldn’t wait for hunting season.

“By September, we had no birds to speak of,” he said. “For every 100 birds we expected to have, we had four or five birds. So we said to ourselves, like anyone would, ‘What in the world happened here?’ Rather than just being quail hunters who owned a ranch, we were fortunate enough to be in the position to do some research. We knew for sure it wasn’t habitat, we knew for sure it wasn’t weather, so what was left was disease or parasites.”