Graysen discovered his passion for agriculture and the need for a truthful voice in his chosen field. 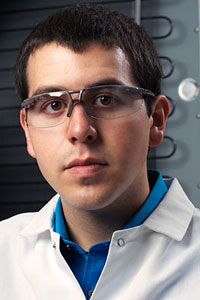 Food science research has long been part of Graysen Ortega’s life. A Lubbock native, he began working in the lab with Mindy Brashears, a professor of food microbiology and food safety, during high school, and his sustained interest led him to declare food science as his major when he began college.

Since coming to Texas Tech, Ortega has stayed active in the laboratory, gaining acceptance into the Texas Tech University/Howard Hughes Medical Institute Undergraduate Research Scholar Program. He also has presented his research on foodborne pathogenic strains of Escherichia coli and species of Salmonella at the annual conference of the Institute of Food Technologists. Because food science has a global reach, Ortega has had the opportunity to travel to Mexico periodically with Brashears and other researchers.

Additionally, Ortega has cultivated interests outside the laboratory. He has served as an intern for the U.S. House of Representatives Committee on Agriculture in Washington, D.C., in addition to his role as president of the TTU Food Science Club and involvement with the Research Chef’s Association. Ortega looks to continue his education, and while his plans are not yet final, he is leaning toward law school.