The university was also selected for participation in Hispanic Quiz Bowl. 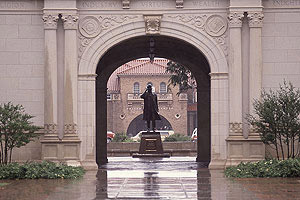 Texas Tech University recently was recognized by Diverse Issues in Higher Education Magazine as one the nation’s top 50 producers of Hispanic baccalaureate recipients.

The magazine focuses on matters of access and opportunity in higher education for all. Its mission is to build educational, cultural, social and economic structures to allow individuals to reach their full potential.

“As we know, the Hispanic population in the state of Texas is significant, and we strive to provide a top-quality education for students from a variety of backgrounds and experiences,” said Texas Tech President M. Duane Nellis. “I am proud of Texas Tech’s recent ranking among the top 50 Hispanic Bachelor’s Degree producers, and I am confident our Quiz Bowl showing will represent the university well.”

Senior Vice President and Vice Provost Juan Muñoz said he is pleased with the accomplishment due to Texas Tech’s distance from a sizable metropolitan area, making this recognition a significant success.

“Texas Tech continues to serve as a national model for fostering a university climate that supports and promotes academic achievement, multicultural competence, social development, civic engagement and the retention of all students,” Munoz said.

“Texas Tech has made great efforts to recruit and retain students from diverse backgrounds,” he said. “Our placement in the top 50 among Hispanic bachelor’s degree producers in the country is evident of our success in this area. Thanks to a continued effort by the university to grow opportunities and resources for Hispanic students, Texas Tech is quickly becoming a leader for diversity initiatives among educational institutions.”

Texas Tech also has been selected to participate in the 2013 Hispanic College Quiz Bowl show. The show is held in September, which is Hispanic Heritage Month, and features college students from different universities to answer questions on Latino history.

The series consist of four half-hour quiz shows that will air across the country. Angela Barrera, senior public relations major from Rio Grande City, will represent Texas Tech at this year’s event.

“Texas Tech’s designation as the nation's 47th top degree producer for Hispanic bachelor’s degrees and the selection of one of our students to participate in the Hispanic Quiz further highlights the university’s commitment to inclusive excellence,” Munoz said.