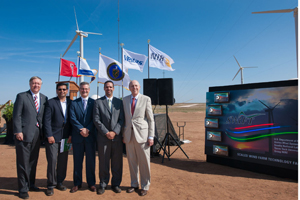 “Some estimates show that 10 to 40 percent of wind energy production and revenue is lost due to complex wind plant interaction,” said Jon White, Sandia’s technical lead for the project.

The site includes two V27 research turbines deployed by the Department of Energy and Sandia, and a third V27 turbine belonging to Vestas, a leading wind turbine manufacturer.

“The completion of the SWiFT facility marks a new and exciting chapter of wind research at Texas Tech University,” said Kent Hance, chancellor of the Texas Tech University System. “Research generated from this venture will enhance the capability of wind turbines, help develop wind power systems of the future and further Texas Tech’s position as a leader in the wind energy industry. We are grateful to our multiple partners who helped make this important project a reality.”

The SWiFT facility could eventually expand to include nine or more wind turbines, which would allow researchers to further examine how individual turbines and entire wind farms can become better “citizens of the grid” and how to be more productive and collaborative.

“Our researchers at Texas Tech University are working to better understand and enhance methods to harness wind energy, and it is vital we forge ahead and discover the full impact this energy source can have on our society,” said Texas Tech President M. Duane Nellis. “Today’s commissioning ceremony of the Scaled Wind Farm Technology facility is a testament to the commitment of the university and its partners to standing at the forefront of wind research, nationally and globally.”

Sandia announced in July 2011 that it would move its wind energy test facility to Lubbock, funded by the Department of Energy’s Wind and Water Power Program.

In April 2012, Vestas and Group NIRE, a renewable energy development company, signed a Memorandum of Understanding that allows use of the facility for collaborative and proprietary research, depending on the research need.

“For Vestas, the commissioning of SWiFT marks the realization of a technology-acceleration vehicle,” said Anurag Gupta, who works for Vestas Wind Systems’ product integration team. “With its intersection of scale and design, this vehicle provides both cost-effective accuracy as well as the ability to bridge fundamental and applied research at the power plant level. This will help Vestas to quickly drive organic and partner innovations to market.” 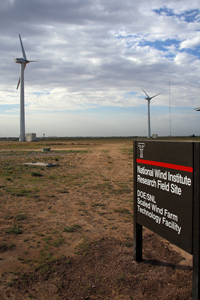 With over 56 GW of installed capacity worldwide and 62 percent more capacity installed than its closest competitor, Vestas is the global leader in wind energy. Since 1979, Vestas has supplied more than 49,000 wind turbines in 73 countries. Vestas provides jobs for more than 17,000 people at its service and project sites, research facilities, factories and offices all over the world. Vestas employs about 2,500 people in North America and its regional headquarters is in Portland, Ore.