Red Raiders will travel to Wal-Mart Corporate Headquarters to present their research ideas. 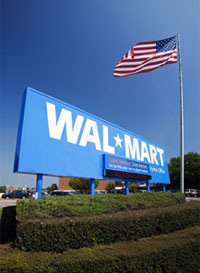 With the help of Deborah Fowler, advisor for the master’s program in Hospitality & Retail Management, the students have been designing Wal-Mart’s “store of the future,” and will present their research and recommendations for a new store prototype to corporate leadership early next week.

“It’s really a unique challenge,” Fowler said. “No other university will have this opportunity. It’s unprecedented.”

Six of the students—Halie David, Taylor Fields, Patrick Bubenik, Jangwoo Jo, Sara Rieke and Callie Worthen—are each working on a master’s in hospitality and retail management. Rahul Kanungoe is a doctoral student in economics.

The students have worked on the project throughout the spring and summer semesters, compiling data provided by Wal-Mart and analyzing research on stores’ productivity (sales per linear foot of shelf space). The group also has done research on marketing tactics, trends within the retail industry and how the layout of the store ensures certain departments can maximize productivity.

“It’s important that we can determine what trends are likely to stick around for a long time and which trends are more of a fad,” Bubenik said.

For this particular prototype, the students said it was important to take into consideration the concept of “flexible fulfillment,” in which consumers seek a quick and easy shopping experience.

“Consumers want to get in and get out,” David said. “They tend to shop more often each week, and the shopping trips aren’t necessarily planned in advance.”

The prototype designed by the students reflects this trend, providing consumers with easier access to certain departments.

Looking at general trends in retail gave the team an idea of where to start, but in order for the students to understand the productivity needs of Wal-Mart, they used four years’ worth of sales data provided by the retail giant.

“We had to look at productivity on several levels,” Rieke said. “Which size of store is most productive, and then which departments were increasing or decreasing in productivity.”

After determining what the productivity needs of the future store would be, Worthen and Kanungoe used a software program to design a 3-D layout of the store’s interior.

The software program, called JDA Floor Planning, was provided to Texas Tech through a $3 million in-kind gift from JDA. The software provides the students with a unique perspective on retail planning that is unparalleled at the university level.

“We have a 3-D layout of the old store, and we can go through the layout for our store and show the differences,” Worthen said. “I really have enjoyed working with the software, it’s so interesting.”

In addition to providing a complete layout for a new store, the team also has looked at how Wal-Mart can use advances in technology to increase its marketing potential.

“Devices like smart phones and LED lights have already been implemented in other parts of the world,” Jo said. “We have several proposals that would help Wal-Mart save money in the long-term and increase marketing potential.”

The students leave Saturday for Bentonville, Ark., and will present their research to more than 200 people at the Wal-Mart corporate headquarters early next week.

For the students, the project is likely to benefit them even if Wal-Mart does not select the prototype or proposals.

“Wal-Mart has hired many of my students who have gone through this class,” Fowler said. “If the students can survive the process, nothing can compare to the experience this gives them.”

Business Students Team Up With IBM, UK for Smart Projects