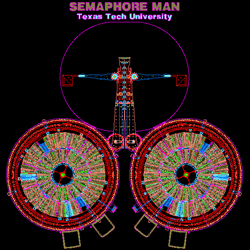 Their winning design, the Semaphore Man, is an interactive educational tool that teaches science, technology, engineering and mathematics (STEM) concepts. The device acts as a flagger that moves his arms and legs to display a message, therefore students must learn to send the correct electrical signals to display the correct message.

“Semaphore Man can be used to teach number systems, variable bit rates, and the transmission of unique signals via multiple signaling schemas,” the students wrote in the project description. The device is about one-thirty-second of an inch tall.

The competition was hosted by the Southwest Center for Microsystems Education at the University of New Mexico and sponsored by Sandia National Laboratories (SNL) and SPIE (formerly known as the Society of Photo-optical Instrumentation Engineers). The competition promotes interest in the design and manufacture of MEMS devices. It is part of an ongoing effort to share technology developed at SNL by students with faculty mentors. There are 30 colleges participating in this alliance.

MEMS technology is often overlooked due to its small size, but it is an integral part of many widely used items, such as smartphones.

“The students came up with a creative and engaging concept that will eventually be used for engineering demonstrations for K-12 students, as well as incorporated into Texas Tech’s MEMS courses,” Dallas said.

Texas Tech and Carnegie Mellon University, winner of the Novel Design Category, will both see their designs birthed in Sandia’s microfabrication facility, one of the most advanced in the world.