Predicting what students will need in the future presents a challenge for new dean. 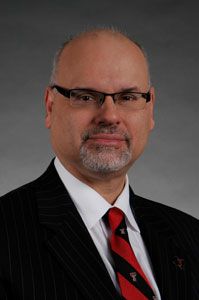 In describing his intended course as the new dean of the College of Media and Communication at Texas Tech, David D. Perlmutter cited hockey-great Wayne Gretzky, who said the secret to hockey is to know where the puck is going to be and skating there, rather than skating to where the puck is; as a college, they have to anticipate the future, invent the future and be the future.

Perlmutter, who was the director of the School of Journalism & Mass Communication in the College of Liberal Arts & Sciences at the University of Iowa since 2009, started his new position July 1. He replaced Jerry Hudson, who retired after 35 years at Texas Tech.

He said having a unified college of communication, such as Texas Tech’s, is of utmost importance because students, no matter what their major or interests, are going into a world of converged and open-ended media. Perlmutter said they may work for a couple years at a retail company doing social media, then at a newspaper and then they get a job at Pixar; the old world – training for one job title in one career – is over.

“I think a diverse college such as ours allows us the flexibility of preparing students not just for a job on graduation, but for a life of reinventing themselves, and pressing the restart switch in many different careers,” Perlmutter said.

Second, Perlmutter said Texas Tech’s College of Media and Communication is an institution deeply respected in the field.

“Jerry Hudson built a wonderful house here,” Perlmutter said. “This faculty and staff are known as being both very productive in terms of ideas – whether it’s research or professional practice or artistry; but also being very dedicated to the students. I picked up on that early, not only from faculty, but from students and alumni, that they really felt cared for and cared about here. And that’s not always true everywhere. So there’s a special relationship that exists in these walls.”

Last, he said there’s a Lubbock/West Texas attitude here that he likes. There’s a story he tells about when he came to campus to interview.

The college is No. 1 in the university in retention of undergraduate students. Perlmutter said that’s important, because if someone is able to get in to Texas Tech, he wants to keep them here and not let life circumstances or some academic bump in the road divert them from their dreams and their parents’ dreams.

Tuning in to the Future

Continuing to modernize and improve the curriculum is another important mission. 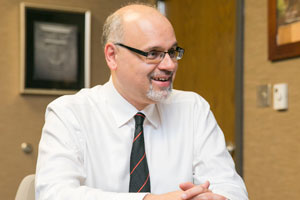 “There are big changes going on in the world of media hourly,” Perlmutter said.

“There are big changes going on in the world of media hourly,” Perlmutter said. “Not only do we have to be attuned to them, but to some extent we need to be anticipating them. And that’s difficult – it means always rethinking what we do and evaluating every day if what we’re doing is effective for our students.”

However, he said, no school of anything anywhere can be great at everything. He said it is important to identify and invest in certain “signature programs, projects and ideas” that will be globally known as the great things going on at the College of Media and Communication at Texas Tech.

One example he gave is the college is well-primed for increasing and expanding its distance and extension offerings. Perlmutter said the world of media is changing so much so quickly, there are a lot of professionals who want to go back to school and refresh their knowledge base to stay current in their various industries.

The second example dovetails on Texas Tech being named in the top 50 schools for producing Hispanic graduates; the college houses the Institute for Hispanic and International Communication (IHIC).

“Because of its geographic location and some of its programs – and we also house the Journal of Spanish Language Media, which is one of the key journals in the world – I think we’re well-positioned to be a center for research, study and practice on bilingual and Hispanic media and related issues,” Perlmutter said.

His bottom line, though, is that the students coming out of his college are legitimately prepared for anything.

“Our students are entering an era where they have to be one-man and one-woman bands,” he said. “They can’t just know one thing. Basically the answer to any employer question about ‘can you, or could you do this’ has to be ‘yes, send me in coach!’ That’s a huge demand on students, but it’s also a huge demand on an educational institution. We must prepare students with the techniques and technology, but especially for the mental rigor of the world they are about to enter.”

Getting to know:
David D. Perlmutter

A documentary photographer, David D. Perlmutter was always fascinated by the power of pictures—how people defined their lives, moments in history, great movements by iconic images.

He is the author or editor of nine books on political communication and persuasion. His titles include:

Perlmutter has written dozens of research articles for academic journals as well as more than 200 essays for U.S. and international newspapers and magazines such as Campaigns & Elections, Christian Science Monitor, Editor & Publisher, Los Angeles Times, MSNBC.com, Philadelphia Inquirer and USA Today. He writes a regular column, “Career Confidential,” for the Chronicle of Higher Education and blogs for that publication’s “The Conversation.”

He has been interviewed by most major news networks and newspapers, from the New York Times to CNN, ABC, and “The Daily Show.”