Hayes Caldwell has worked at the Caldwell Zoo in Tyler for 50 years. 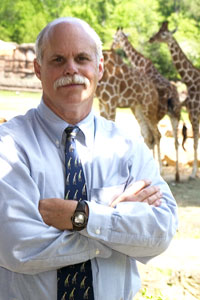 Texas Tech alumnus Hayes Caldwell has worked at his family zoo for 50 years.

He has always been an animal lover. But while most 14-year-olds were exposed to the typical dogs and cats, this Texas Tech alumnus was working with animals such as parrots, monkeys and alligators at his uncle’s zoo.

Hayes Caldwell now is celebrating his 50th year at Caldwell Zoo in Tyler, the same zoo he has been working at since he was 14. His uncle, D.K. Caldwell, originally opened the zoo in his backyard in 1937 as an educational program for a local preschool.

“His zoo started innocently enough with probably a leftover Easter bunny, a couple of ducks and some chickens, and over time it just grew and grew and grew,” said Hayes.

Eventually word got around Tyler about D.K.’s backyard zoo.

“His wife called him one day and told him to come home, when he did he saw about 20 or 30 people enjoying the animals in his backyard,” Hayes said. “They decided it was probably time to move the zoo to another location.”

The Caldwell Zoo moved to its present location in Tyler’s northwest corner and with more animals and more space, D.K. decided to hire his nephew in the summer of 1963 for a quarter a day.

“I thoroughly enjoyed it and every summer and holidays I spent my time here working at the zoo,” Hayes said. “By the time I reached high school I knew -I didn’t know it would be this zoo- but I knew I wanted to pursue a career in the zoo profession.”

Call of the Wild

Hayes said he felt drawn to the zoo profession and that it affected his decision when choosing a university. At the time, the park administration program at Texas Tech University was led by Elo Urbanovsky, who had been a chair for the National Recreation and Park Association and overseen the workings of zoo administration.

Due to Urbanovsky’s work on campus, Texas Tech has dedicated the park southeast of the Recreational Center in his honor. 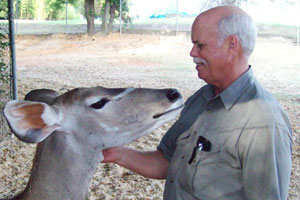 Caldwell and a kudu.

Urbanovsky’s program really appealed to Hayes because of its diverse biology and wildlife coursework.  Hayes said Urbanovsky taught him to have a clear vision of what he wanted to accomplish.

“Elo Urbanovsky was a great teacher and mentor and really impacted a lot of us,” Hayes said. “He was really an instrumental part of my early career because he encouraged us to get out, go places and bring back what can fit into what you’re trying to accomplish.”

After graduating in 1972, Hayes put Urbanovsky’s vision lesson into action by developing a master plan for the expansion of Caldwell Zoo.

In 1976 a new entrance complex, elephant facility, giraffe barn and other animal environments were added to the zoo.  Hayes also increased attendance and Caldwell Zoo was soon named one of the country’s top facilities of its kind by the Association of Zoos and Aquariums.

“What he’s done to that zoo and built to that zoo is pretty incredible,” said Mark Reed, executive director of Sedgwick County Zoo in Wichita, Kan., and fellow Texas Tech alumnus. “It’s my favorite zoo and I think you’d get a lot of people in my profession that would say the same thing.”

Reed met Hayes early in their careers while working at the San Antonio Zoo. Reed said Hayes’ southern gentlemanly personality paired with his sharp business skills is why he’s so successful in this industry.

“I’ve never heard him say anything stupid, he’s very soft-spoken, articulate; he’s just a smart guy,” Reed said.  “He truly lets what he’s done at that zoo speak for himself.”

Today the 85-acre zoo is home to more than 2,000 animals and 250 species.  Hayes hopes to continue providing a fun experience to educate the whole family to enjoy and to build onto the legacy his uncle and aunt started in their backyard.

Even after 50 years, Hayes said he sometimes still feels like that 14-year-old boy cleaning cages for a quarter a day.

“When you do something that you really enjoy doing, it’s not really a job for you and time really flies by,” Hayes said. “It’s been an incredible journey and I wouldn’t trade it for anything.”

Getting to Know:
Hayes Caldwell

What is your favorite Texas Tech memorabilia or article of clothing?
Black cap with red Double T

What is your favorite spot on campus?
Jones AT&T Stadium

What is your favorite part of being a Red Raider?
Having spent four wonderful years in West Texas

What is your favorite Texas Tech tradition?
The Masked Rider at football games

What impact has Texas Tech had on your everyday life?
Texas Tech laid a solid foundation for me to build a career on and knowing as the saying goes—“from here, everything is possible.”