Astronaut Joe Acaba is a distance learning graduate student in the College of Education. 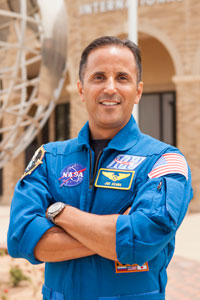 Acaba, who served in the U.S. Marine Corps and taught five years of high school and middle school math and science, was selected as a mission specialist by NASA in 2004 along with several other teachers.

He currently is a distance learning student in the College of Education at Texas Tech University, and his talk today involved engaging with teachers and providing them with topics and resources for the classroom.

“I always stress the importance of math and science,” Acaba said. “Even though we don’t necessarily use math in our daily lives as astronauts, we totally rely on the tools built by the NASA engineers. It has to be foolproof.”

Upon completion, Acaba was assigned to the Hardware Integration Team in the Space Station Branch, working technical issues with the European Space Agency hardware. He was also a member of the Space Shuttle Branch, supporting shuttle launch and landing preparations at the Kennedy Space Center in Florida.

Acaba was on the STS-119 Discovery in March 2009, which was the 125th shuttle flight. The primary objective of the flight was to deliver the final pair of power-generating solar array wings and truss element to the International Space Station. 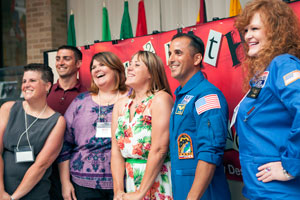 In May 2012, Acaba embarked on Expedition 31/32 from the Baikonur Cosmodrome in Kazakhstan, which lasted until September 2012. During the course of this visit to the International Space Station, he participated in numerous scientific research experiments and performed regular maintenance and operational tasks aboard the orbiting complex.

Although Acaba has visited the Texas Tech campus before, this is his first visit in a professional setting.

“The campus is just beautiful; I’m so impressed with the faculty and students here,” Acaba said. “We work with many engineers that are Texas Tech alumni, and they just love this place.”

NASA encourages their astronauts to make speaking appointments often, and Acaba said he chooses the educational opportunities so he can share his background as an educator and the challenge of becoming an astronaut.