Low doses of arsenic and estrogen together can cause cancer in prostate cells. 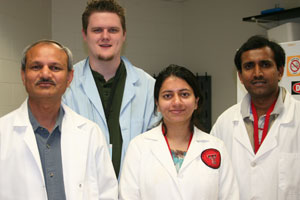 Texas Tech researchers have found low doses of arsenic and estrogen together can cause cancer in prostate cells.

Science knows that arsenic and estrogen can cause cancer. At certain very low levels, the chemicals offer little to no threats to human health.

However, new research conducted by Texas Tech University scientists has found that low doses of both chemicals together – even at levels low enough to be considered “safe” for humans if they were on their own – can cause cancer in prostate cells.

The combination of the two chemicals was almost twice as likely to create cancer in prostate cells, the research found. The study published online in the peer-reviewed journal The Prostate.

Kamaleshwar Singh, an assistant professor at The Institute of Environmental and Human Health (TIEHH) at Texas Tech said the findings could have an impact on health regulations regarding the “safe” doses of these chemicals and others. Most regulations are set by testing one chemical at a time on cells. Very few if any have looked at multiple chemicals at the same time.

“The majority of cancers are caused by environmental influences,” Singh said. “Only about 5 to 10 percent of cancers are due to genetic predisposition. Science has looked at these chemicals, such as arsenic, and tested them in a lab to find the amounts that may cause cancer. But that’s just a single chemical in a single test. In the real world, we are getting exposed to many chemicals at once.”

Singh said he became interested in studying two chemicals at once after looking at arsenic’s carcinogenic properties in a previous paper. 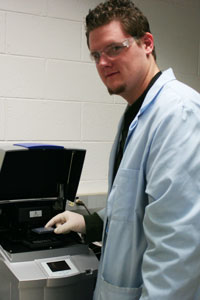 Because cigarette smoke and well water in some areas, including India, Mexico and even Lubbock county, can contain arsenic, Singh and his doctoral student, Justin Treas, wondered how the carcinogenic properties might change when paired with the presence of another carcinogenic chemical.

The two focused on estrogen because of the chemical’s abundance. Many plastics, such as food can liners and bisphenol A (BPA), release small amounts of chemicals that mimic estrogen in the body.

Unlike stronger chemicals that do major damage to the DNA in a cell, such as benzene, arsenic and estrogen aren’t major mutagens Singh said. Instead, their presence tends to stop certain genes from expressing. The process is called DNA hypermethylation.

In the experiment, human prostate cells were treated about once a week for six months with arsenic, estrogen and a combination of the two. Many of the tests involved levels of arsenic, estrogen or both at levels considered safe by the Environmental Protection Agency.

Treas said the two chemicals stopped the MLH1 gene, which is responsible for sending the signal to start the self-destruct sequence when a cell is damaged. Because the self-destruct couldn’t activate, the cells became cancerous after exposure.

“With the lower dose not killing the cell, it’s causing damages that go under the cell’s radar,” Treas said. “We found when you have two compounds together, lower doses could be more serious problem.”