Texas Tech's 16th president is excited about the future of the university. 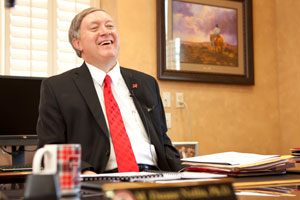 Nellis, who was officially named president March 22, comes to Texas Tech from the University of Idaho, where he served as president beginning in 2009. He previously served as provost and senior vice president at Kansas State University and dean of the Eberly College of Arts and Sciences at West Virginia University.

“Today I met with my executive team and we went over my priorities for the coming year,” Nellis said. “Since I was named the sole candidate (March 1), I’ve been gathering as much information as I can as I prepare to provide leadership, as we work collectively to move the institution forward.”

Nellis spent the day meeting with university leadership and members of the Lubbock community. He also met incoming students and their parents who are here for Red Raider Orientation. He will leave tomorrow for Washington, D.C., where he will attend the national university presidents’ meeting as part of the Association of Public and Land Grant Universities. While there, he also plans to visit the Texas Tech facility, meet with area alumni and key congressmen, as well as Texas Tech’s current congressional and White House interns.

Nellis said he is anxious to visit with Texas Tech administrators and faculty, and to begin working on key initiatives.

“It is very important that I get out into the colleges and into the different units within the university; to meet with the deans, the faculty and staff, and to see some of their key facilities and interact with them,” Nellis said.

Nellis and his wife Ruthie have met many members of the Lubbock community, and he said they are looking forward to getting acquainted with the area and with the rest of Texas as they look forward to visiting several Texas cities in the upcoming months.

“What I’m looking forward to the most is when the students get back in the fall,” Nellis said. “There’s something special about the fall semester when all the students are back. I’ve made my career being at universities because of the students and the excitement that comes with interacting with them.”

Lawrence Schovanec, who served as the interim president beginning in July 2012, began his term as interim provost today.