During his 23 years on staff, Tony Aleman's daughters have graduated, and one now also works on campus. 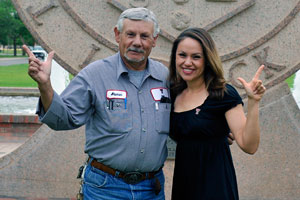 Jill and Tony enjoy seeing each other on campus.
(click to enlarge)

There’s a reason Jill Aleman says she comes to work at Texas Tech every day with a smile on her face: she loves her job and sees her father, Tony.

Tony has worked for Texas Tech for 23 years as a carpenter and tradesman. Jill, his youngest daughter, received two degrees from Texas Tech in 2001 and 2006. After graduation, she wanted to be like her father and work at the university, and is now a senior teacher at the Child Development Research Center.

When Jill and her older sister Tammy were younger, they would visit their father at work to eat lunch with him. Tammy also is a Texas Tech graduate.

“He always talked about Texas Tech and it being a wonderful place to work at,” Jill said. “It was pretty much ingrained in us when we were younger that this is where we were going to go to school. We’ve always been a Texas Tech type of family.”

Jill was in elementary school when her father first became employed with Texas Tech. The family would attend Texas Tech sporting events, where they supported Red Raiders athletics.

Then his daughters attended Texas Tech, where Tony remembers spotting them as they walked to class.

“We would wave to one another and say hello,” Tony said.

Jill learned of an open teaching position at Texas Tech after graduation and following in her father’s footsteps, found a career as a Red Raider staff member.

“With him being a Red Raider and working for Texas Tech, when this job came open for me, I knew I definitely wanted to be a part of the Texas Tech family,” Jill said. “My dad is through and through a Texas Tech fan, whether its sports or anything on campus. He loves helping out. I think that’s one of the things he loves about his job.”

Jill, who no longer lives with her parents, said it is nice to still see her dad regularly. With both working on campus, they still often eat lunch together.

And, of course, when the father and daughter see each other in passing, they still have time for that quick wave and hello.