The workshop was part of Department of Theatre and Dance’s new WildWind Performance Lab. 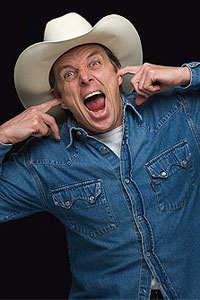 A “phantom” threatens to upset the Christmas lawn decoration contest. A mother fights to keep her delinquent and dysfunctional family together. A man is abducted by aliens, but willingly goes to escape his gun-loving, world-hating wife. And to top it off, two legendary Texas performers and playwrights portray the 22 characters in this slice-of-West Texas comedy.

That’s what makes “A Tuna Christmas” – the second play in the four-part Tuna series – so funny to audiences throughout the world. Now, co-creator and Texas Tech alumnus Jaston Williams brought the 24-year-old play to his alma mater for a workshopping event to see what the show would look like if a full cast played all the roles instead of just two actors.

“I have a strong friendship with the department chairman, Mark Charney,” Williams said. “We met a couple of years ago and hit it off. Since we’re [Williams and co-creator Joe Sears] not doing ‘A Tuna Christmas’ ourselves anymore, I always wondered what you could do with this show with more than two people. ‘A Tuna Christmas’ is the better of the plays, I think, and I just wanted to see if we could re-visualize it with a full cast. We’re having a ball with it. It was really amazing.”

The workshop was part of Texas Tech University Department of Theatre and Dance’s new WildWind Performance Lab. This new summer program has replaced the traditional Tech Summer Rep and is based on Charney’s experiences with the Sundance Playwrights Lab, the Wordbridge Playwright’s Laboratory and The O'Neill Theatre Center.

Along with “A Tuna Christmas,” students also are participating in developing two plays and working on a devised piece, which is a movement piece in which a director is present, but all performers have a say in developing the final product.

“The WildWind Performance Lab provides an education for students at Texas Tech that had them mixing with as many professionals as they could in one place,” Charney said “We wanted to bring in 11 guests to work on everything from devised theatre to playwriting.  So, we talked to Jaston about coming in and working on playwriting workshops and speaking to students one-on-one about their performance career. He just happened to remark that he had an idea of seeing what ‘A Tuna Christmas’ would be like with a full cast. I said, ‘What if we have all these students involved as well as people from the community, since WildWind is also for the community, not just the students, and we did a staged reading. He was really excited about that. This turned out to be a magical experience. I knew it would be good.” 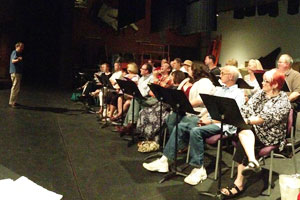 Casting on a Tuesday, Williams, Charney and Texas Tech audience relations specialist Richard Privitt filled roles with actors from Texas Tech as well as former alums and actors in Lubbock. After a Wednesday rehearsal day, the troupe performed a reader’s theatre version of the show Thursday night in front of an audience.

Williams and Charney will workshop the show again this fall and in the spring of 2014, possibly rewriting sections to compensate for the larger cast. If the pair and the faculty agree, Charney said he and Williams might launch a world premier of a full-cast version of the show at Texas Tech’s Maedgen Theatre in the fall of 2014.

Williams said he loved watching other people’s takes on characters he has played for years.

“People had an understanding of it,” he said. “A number of the students did really thoughtful and beautiful work. When you see someone take a character and approach it with a completely different concept, it was wonderful because it worked. I especially saw that with the students. It was a good experience for me. We were just scratching the surface. These were just baby steps for something great in the future.”

Kim Ansolobehere, who studied theatre at Texas Tech with Williams in the summer of 1970 and 1971, was cast as Tasty Cream waitress Inita Goodwin with fellow Texas Tech alumna Susanne Wiley playing Helen Bedd opposite.

She said she loved the experience of working with Williams again as well as seeing how this Texas Christmas classic might sound with a full cast. 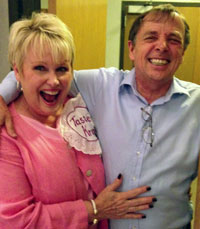 “We were friends in college,” she said. “When I come back to do summer rep, we got to be good buddies. I can just look at him and start laughing. We used to get into so much trouble all the time. I got an email from Richard Privitt, and it said I’ve been asked to audition. Jaston is trying to re-imagine ‘A Tuna Christmas.’

“Well, at the audition, I kind of wanted to play Vera Carp, but he wanted me to read for Inita. Then he said, Susanne, read Helen. They’re the old gals who run the Tasty Cream, and they’ve got a big scene together and have a lot of fun. We had a great time, and everyone laughed a bunch. Jimmy (Jaston) said, ‘Alright, y’all are going to be Inita and Helen.’ I just kind of played me with a tacky Texas accent. You think about all the people you’ve seen at the Dairy Queen, it’s pretty easy.”

Graduate student Randall Rapstine currently is enrolled in the MFA performance and pedagogy program with an emphasis in acting and directing. He said he enjoyed watching Williams in action during the workshop as he randomly assigned parts to the actors, then stop periodically and re-assign parts, attempting to hear each actor's voice and working to match them with the appropriate characters.

“It seemed to me that Jaston was going off his instinctive knowledge of what was right for each character, and matching it with the innate qualities of each actor,” Rapstine said. “When the actor and role clearly clicked, he would assign the part to that actor.”

Williams assigned Rapstine to play Aunt Pearl, the matriarch of one family with a surly-yet-sweet side as well as Thurston Wheelis, a radio personality from the town’s small OKKK station.

“I was thrilled to participate because I’m a ham who loves to act and I’m a huge fan of the ‘Tuna’ plays and have always longed to be a part of one,” Rapstine said. “I’m a professional actor, director and writer who has returned to school at Texas Tech to earn my advanced degrees. To be offered a chance to work with Mr. Williams on one of his hilarious scripts was too good to miss. My father, a Tech grad, loves the Tuna shows. They are a reflection of the small-town existence most Texans are intimately familiar with.  My dad grew up in White Deer in North Texas, so the play characters are almost like family to him.  The same holds true for me.”

A middle-aged woman mourns the loss of her father as she searches for her missing daughter, a recovering drug addict who has apparently succumbed to relapse. Her search is further haunted by the ghost of a murdered boy she barely knew in high school, as she navigates the unfamiliar, underground territory where she may or may not find her daughter.

#LookUP is an original work created by ALL of the actor/dancer/warrior/artists of the first annual Wild Winds Performance Laboratory. This piece explores the dynamics of witnessing, suffering, the eternal, and the need for human connection. Incorporating video, dance, light and poetry, this show offers audiences, what is intended to be, a sensorial feast for heart, mind and soul.

What happens when a new prophet is born? A dark comedy that discusses faith and humanity, The Prophet Darla explores what it means to be thrust into a new role and the expectations that follow. Sometimes a journey of Prophetic proportions just takes a little leap of faith.

The Road Home from Tuna