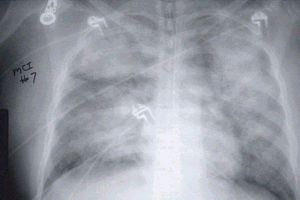 Hantivirus can cause a fatal pulmonary disease, with X-rays revealing a white-out in the lungs.

It still hurts some people in the Four Corners area to think about the hantavirus, said Dr. Bruce Tempest, chief of medicine at the hospital and a commissioned officer with the U.S. Public Health Service (Indian Health Service). A group of young, healthy people died. Families lost members. Because the virus attacked more Native Americans, racial issues swirled and people were stigmatized and labeled.

“It’s not a good memory for people living around here,” he said. “But scientifically and medically, there was a lot that happened and a lot of new things were found. It’s got its good and bad points. One thing I tell my friends that this whole thing was worked out with tax-supported institutions; the federal government, the Indian Health Service and the state government. It was all tax money at work. And the people who were here worked very hard. Nobody said ‘I’m worried about catching this thing.’ When I looked back on it, nobody really thought they were going to get sick from being involved, which has happened with other diseases with people refusing to care for sick people. There was none of that.”

Tempest wondered if plague might be a factor in the dead patient’s sudden demise. That disease occurs in animals living in the area, though rarely involves humans. However, a pneumonic plague victim could portend a major health problem for the community, he said.

The tests for plague came back negative.

“That same day, I found out that his fiancée’s family was actually having a funeral for her across the street from the hospital,” he said. “I was told she had died a couple days before. So here are these two young, healthy and athletic people that had died, who obviously were living the in same environment.”

The man’s fiancé had died at another hospital about 60 miles away, Tempest said, and he had remembered speaking to the chief of medicine there about the strange case that had stumped doctors at the other hospital, too. The woman had come into hospital with the same sort of symptoms: severe muscle pain, fever for several days and then rapidly developed respiratory failure, shock and died.

“When he had called me, this young woman was still alive,” he said. “We talked about what it could be, but we weren’t able to come up with a diagnosis. In trying to think what was going on, it didn’t fit anything I could think of off the top of my head.”

Tempest talked to other colleagues and discovered that a patient had come into the hospital with the same group of symptoms six weeks before during Easter weekend. Then he remembered a chart he’d been given for review of a patient who died with the same mysterious symptoms six months before at another Indian Health Service Hospital 100 miles away.

Piece by piece, Tempest could see that a new or emerging health threat might be taking hold in his community.

“By end of the day, I had put together five patients who were young and healthy and had this very strange syndrome,” he said. “I called the physician at the state health department who was in charge of infectious diseases, who talked to some of his colleagues, and they didn’t have any likely answers. In the meantime, we got the medical examiner to take jurisdiction, and we also had collected the laboratory stuff that we would be running over the next day or so. We planned to talk again on Monday. 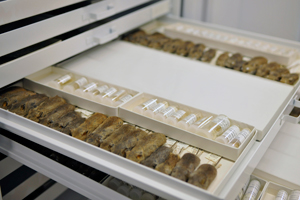 The mammal collection at Texas Tech ranks fifth among academic-affiliated collections and houses species from all continents and 107 countries. Rodent samples collected 15 years before the Hantivirus outbreak were crucial to the discoveries made by Texas Tech scientists.

“Well, on Monday, we didn’t have an answer from the medical examiner, and all tests we had done were negative. That’s when we really started working on it by getting more people at the health department involved and starting an investigation. Eventually we ended up calling in the Centers for Disease Control and Prevention (CDC) as well. It moved really rather quickly once we recognized there were at least five patients spread over a couple months. We really started getting concerned.”

In Lubbock, Robert Baker, a Horn Professor of Biology at Texas Tech University, remembers reading a story on the front page of the Lubbock Avalanche-Journal that said the disease might be an escaped biological weapon. Tempest remembered rumors that a biological agent may have come from an army ammunition depot outside of Gallup, N.M.

While that might have been a possibility at the time, Baker thought the likely culprit was a disease already in the environment that just hadn’t had the opportunity or the right conditions to find its way into the human population.

Health officials trapped rodents around victims’ homes trying to find which species carried the virus. Soon they had their culprit – the deer mouse.

“At the time I got involved, I think scientists already thought it was probably a zoonotic disease carried in some other organism,” Baker said. “I knew we had the stuff in the Natural Science Research Laboratory (NSRL) that would answer the question of how widely ranging the disease might be. I called the CDC and said, ‘We can answer the question because clearly this is going to be something coming out of a reservoir species.’ When they had identified the mouse that harbored it – the deer mouse – I told them we had stuff in our museum that was 15 years old from over much of the U.S. And molecular methods would allow researchers at the CDC to identify if it was something that was recombinant DNA, (meaning a virus that had blended to make another virus that was more virulent), or if it was a naturally occurring disease.”

Originally one of three other repositories like it in the country, scientists had been cataloging for decades biological samples and their geographic locations of origin in the NSRL’s database. The building preserves a library of natural specimens for education and research purposes to record the biodiversity on the planet as well as a historical reference for documenting changes in the environment and the effects of the change on wildlife and humans. 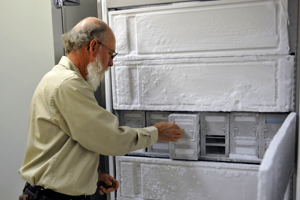 Tissue samples of thousands of animals from around the world still are kept in Texas Tech's Natural Science Research Laboratory.

The mammal collection at Texas Tech ranks fifth among academic-affiliated collections and eighth in size of all mammal collections. It houses species from all continents and 107 countries, with an emphasis on species from the southwestern U.S., Central and South America. Specimens collected from Chernobyl also are housed here, Baker said, and have been used to show that even in the most radioactive areas, the gross mutations that most scientists expected aren’t occurring.

“One thing Texas Tech has specialized in is building up a huge genomic resources collection,” said Robert Bradley, a professor of biology and curator of mammalogy at the NSRL. “We were one of four major universities, which included Berkeley, University of New Mexico and Louisiana State University, that started collecting this in early to mid ’70s. We have 300,000 vials of tissue from all over the world. People can use them to look for viruses.”

Originally conceived as a resource for identifying species through morphology and genetics, Baker said the hantavirus epidemic showed that the specimens could also be used to detect viral material trapped in the frozen tissue.

By looking at lung tissues from deer mice tissue samples from the NSRL, Baker determined that the disease was from the area, had been there years before the outbreak occurred and that bioterrorism or a recombinant form of another virus were not at play.

Baker and Tempest both explained how El Niño weather events before had caused greater rainfall, providing more food for the deer mice. That, in turn, drove a population explosion and created more animals carrying around more of the virus, which Tempest said he suddenly noticed almost each morning when he would find dead deer mice in his bathtub brought in by his house cat.

Victims of the disease often were living in rural areas, Baker said, in buildings where mice were able to complete their life cycle and their urine and feces were able to accumulate. Mice weren’t affected by the virus, but carried it with them. While not a robust virus and easily killed with cleaning supplies and even by the sun, they would breathe in aerosolized particles of the mouse waste, and the virus would infect the human host.

“We had all the epidemiology we needed to know about how the disease was spreading in three weeks,” Tempest said. “We made videos, all kinds of posters and handouts for public education. It was fortunate we got an answer in three weeks. I think things would have started spiraling down. Just being able to put a name on something makes a huge difference.”