David D. Perlmutter was director of the School of Journalism & Mass Communication at the University of Iowa. 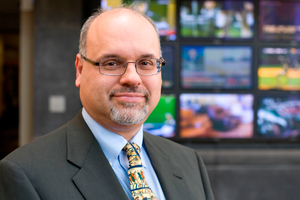 David D. Perlmutter, new dean of the College of Media and Communication.

Texas Tech University officials announced May 8 that David D. Perlmutter will be the new dean of the College of Media and Communication (CoMC), effective July 1. He replaces Dean Jerry Hudson, who is retiring after 35 years at Texas Tech.

Perlmutter has been the director of the School of Journalism & Mass Communication in the College of Liberal Arts & Sciences at the University of Iowa since 2009.
The announcement came from Provost Bob Smith; the search committee was headed by Stephen Fritz, interim dean of the Honors College.

"I am delighted that Dr. Perlmutter has accepted our offer to join the university as our new dean of Media and Communication," Smith said. "He has a sterling record of contributions as an administrator, scholar, teacher and mentor at the Universities of Iowa and Kansas, and Louisiana State University. His accomplishments as director of the University of Iowa School of Journalism & Mass Communication are particularly noteworthy and should serve him well as he moves to Texas Tech."

Hudson said his successor is an excellent choice to lead the College of Media & Communication.

"Dr. Perlmutter's academic accomplishments and leadership experience are quite impressive," Hudson said. "I think he will continue to lead the undergraduate and graduate programs toward growth and excellence."

"I am humbled and honored to take the reins from Jerry," Perlmutter said. "In our industry and academic circles he is known as one of the great administrators, as well as a visionary, innovator and bold strategist. He has moved the college forward and brought prominence and respect to the discipline."

Perlmutter has been in higher education 25 years, and both his parents were professors.

"In all that time, I've never been on a campus such as Texas Tech, where everyone – from undergraduates to the chancellor – has taken on such an excitement for the future," he said. "Texas Tech is such a can-do place, I'm eager to join you and feel right at home."

In addition to his research, teaching, and administrative duties at Iowa, he served on the Provost's Strategic Global Initiatives Council, the Advisory Council for the Office of the Vice President for Strategic Communication, the campus Fulbright Committee and is an International Programs Faculty Fellow as well as a Starch Faculty Fellow in the College of Liberal & Sciences.

At the University of Kansas he served as associate dean for Graduate Studies and Research and as a member of the University Press of Kansas Editorial Board Committee, and he graduated from the Senior Administrative Fellows Program. 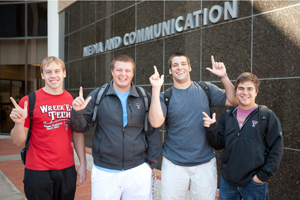 The newly renovated Media and Communication building opened for students this academic year.

A documentary photographer, he also is the author or editor of nine books on political communication and persuasion.

He has written several dozen research articles for academic journals as well as more than 200 essays for U.S. and international newspapers and magazines such as Campaigns & Elections, Christian Science Monitor, Editor & Publisher, Los Angeles Times, MSNBC.com, Philadelphia Inquirer and USA Today. He writes a regular column, "Career Confidential," for the Chronicle of Higher Education and blogs for that publication's "The Conversation."

In 2010 he was elected to the Association for Education in Journalism & Mass Communication Standing Committee on Research. In 2011 he began a three-year term on the AEJMC Finance Committee.

Perlmutter has been interviewed by most major news networks and newspapers, from the New York Times to CNN, ABC, and The Daily Show. He regularly speaks at industry, academic and government meetings and runs workshops on personal and institutional branding via social media and on promotion and tenure in academia.