The team consists of 14 veterans and four freshmen. 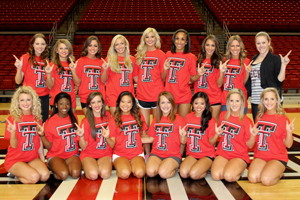 The Texas Tech University Spirit Program has named the 18-member pom squad for the 2013-2014 season.

A total of 60 dancers completed the audition process, with four new freshmen and 14 veterans being selected to the new team.

Erin Harold, who completed her first full year as pom coach, posted all of the audition material to a private YouTube account and sent the links to the candidates one week prior to the preliminary auditions.

Preliminaries consisted of fight song and chant evaluation, jazz combination and hip hop combination evaluation, and individual technique. Harold took 32 dancers to finals for the 18 spots. Eight of the auditions came via video and were scored the same as those that attended the live audition.

“We are so happy with the talent that we saws at auditions this year,” Harold said. “We have an amazingly talented team and are looking forward to seeing them progress even further throughout the year.”