Co-ed and all-girl teams help to fill many event requests.

The Texas Tech University Spirit Program has named the 32-member co-ed cheer squad and the 14-member all-girl squad for the 2013-2014 season. The all-girl squad was added last year to help fill the need for cheerleaders at more athletic and other events and to involve more students.

For the two squads, a total of 106 students auditioned. For the 32-member co-ed squad there were 40 female and 26 male contenders, and for the 14-member all-girl squad, 40 young women tried out.

“This was the most impressive and all-around skill-packed tryout we have had here at Texas Tech,” said Bruce Bills, cheer coach. “Each athlete trying out did an exceptional job.  I’m excited for the new squads and the levels this program is reaching. We have a great group of student leaders and are looking forward to showcasing their talents in the upcoming year.”

Auditions included gameday/spirit, for which they learned and performed the Texas Tech Fight Song and sideline chant; tumbling, including standing tumbling, jumps to tumbling, and running passes; and stunts.

“We could not have imagined the talent we would attract on this team which, by the way, represents students from eight states,” said Stephanie Rhode, director of the spirit program. “I am so proud of Bruce for assembling such an elite group.”

Named for next year’s squad are 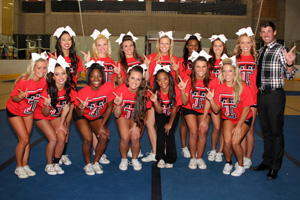