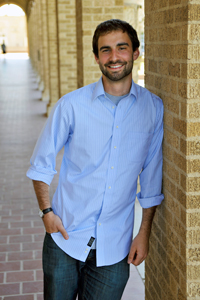 For many students, getting through medical school is a challenge. For one Texas Tech University Health Sciences Center (TTUHSC) medical student, that challenge was met with a second degree from Texas Tech, along with a substantial volunteer commitment.

Justin Berk, who graduates from Texas Tech University’s MBA program this weekend, is working on a dual-degree with TTUHSC and the Rawls College of Business. Texas Tech University System is one of only two systems in the nation that allows students to receive both an M.D. and an MBA in four years—the traditional period of time to complete an M.D. alone.

“The joint-degree program is so unique, there’s really no other place you have that kind of accelerated program, so that’s been tremendous,” Berk said. “I’m going to have my MBA. That’s unbelievable when I think about it.”

An Amarillo native and graduate of Yale University for both his undergraduate degree and for a master’s program in public health, Berk returned to West Texas to pursue what he said was the most cost-effective way to pursue his passions.

“There’s a lot of research about global health, especially in developing countries, and pretty much the top five causes of disease globally are things like malaria, diarrheal diseases, respiratory infections,” Berk said. “They’re things for which we’ve had cures for years, but there is no access to medicine, no access to vaccinations, no access to care.”

Despite understanding the global health impact of such diseases, Berk said he realized the solutions to these problems dealt more with the basic logistics of globalization.

“You know you can get Coca-Cola to those areas but you can’t get medicine there,” Berk pointed out. “That piqued my interest into developing more of a business mind-set, to try to address those logistics issues and global health systems issues.”

Berk said it was important for him to attend a medical school that was giving back to the community in some way. He found that in TTUHSC’s Free Clinic, a weekly student-run clinic that provides free care to members of the Lubbock community who may not otherwise be able to afford treatment.

Berk served on the leadership team as the student director for the 2012-2013 school year, and said the experience was tremendous.

“It’s a kind of intersection between public health, business and medicine, so it made sense,” Berk said. “I was humbled and proud to be selected for the leadership team as student director.”

The clinic, which required approximately 20 hours of Berk’s time per week on top of his joint-degree program, is run entirely by medical students, including administrative work, inventory management, patient flow, record-keeping, recruitment and marketing.

Students receive the full-learning spectrum, not only on the medical side but also in how to run a medical practice, Berk said.

Berk was awarded the American Medical Association’s Excellence in Medicine Leadership Award, a national prize given to 16 medical students across the country, and the Texas Medical Association Student of the Year, which he will be awarded in Austin on Friday. He will fly back to Lubbock to walk across the stage at the Rawls College of Business graduation ceremonies.

His time at Texas Tech, however, is far from over.

Although he still has two years on the TTUHSC campus, Berk says Texas Tech has opened up opportunities he wouldn’t have elsewhere.

“The people here are some of the most dedicated, hardworking, friendly, supportive group of people and friends that I can imagine,” Berk said. “Some of that is the southern culture but a lot of that is just Texas Tech in general. I’ve been really happy. I feel like I’m learning a lot and I feel very prepared for the medical licensing exams and received many great experiences. It’s definitely been living up to my expectations.”