Staying Prepared for the Next Possible Outbreak

Hantivirus epidemic has helped scientists search for other diseases that might crop up in humans. 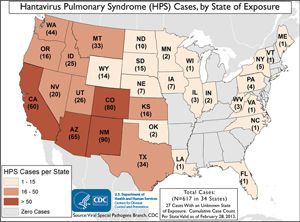 Click to enlarge. (Graphic courtesy of the Centers for Disease Control)

Since the initial outbreak and the public health education that followed, people living in the Southwest have learned to be careful around rodent droppings. That’s not to say that cases don’t still occur, but Tempest said people, by and large, have adapted to keep their properties as rodent-free as possible while using caution when getting around rodent droppings.

According to the Centers for Disease Control (CDC), 53 people were reported to have contracted hantavirus through Dec. 31, 1993. Males comprised 57 percent, and the median age of sufferers was 31. Native Americans made up the majority at 49 percent, while 42 percent were white. Only eight percent of victims were Hispanics and two percent were black. Death occurred in 60 percent of the cases.

The CDC reported 556 cases occurring from 1993 through the end of 2011. Of the people ill with the disease, 63 percent were male, but now 78 percent of the cases affect whites and only 18 percent of the cases involve Native Americans. Hispanic cases have increased to 20 percent while blacks have remained the same. Death has occurred in 36 percent of cases.

The organization also has identified 31 cases retrospectively by examining samples of tissue belonging to people who had died of unexplained adult respiratory distress syndrome. The earliest case found so far is a 38-year-old Utah man who died in 1959.

Robert Baker, a Horn Professor of Biology at Texas Tech University, said scientists found a relation to the disease in the Four Corners region with a similar virus discovered in the 1950s during the Korean War. Called the hantan virus after the river flowing through South Korea, scientists used the old virus’s name as the moniker for the new because of its relation.

“At the time the Four Corners disease was discovered, it was a new disease, and they knew very little about how wide-ranging it was,” he said. “Today we understand that hantavirus is distributed over much of the world. The HV in Scandinavian countries makes everyone get a runny nose, but it’s not a really life-threatening disease. It’s in lots of different creatures. It’s been described in shews and bats, and each one of these is unique. And some of them do get into human beings, but most of them don’t. We understand a lot more about reservoir species today – the ones that have the virus. That interaction is very significant.”

Today, scientists have even sequenced the genome of the differences in the virus so they can tell from which part of the country a viral strain originates, Baker said. Recently, doctors pinpointed Tucson as the origin in a patient in Lubbock who recently succumbed to the virus.

The 1993 outbreak piqued the curiosity of scientists at health organization such as the National Institutes of Health and CDC, Baker said, to find out what other diseases might be waiting for the right circumstances to crop up in the human population.

And that’s what people are doing, said Robert Bradley, professor of biology and curator of mammalogy at Texas Tech's Natural Science Research Laboratory. With more than 300,000 vials of tissue from all over the world, researchers can use them to look for, say, better anticoagulant enzymes in vampire bats to create better medicines for heart attack victims, as well as rogue viruses. 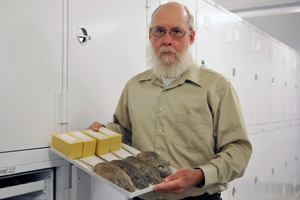 “It changed the way people think,” Baker said. “We, the public, felt like we knew every disease out here. Now we know there are 20 other diseases killing people, not very frequently, and we know they exists but we don’t know what they are or what species of rodents are carrying them. There’s a lot of work to be done to answer those questions.”

Baker said epidemics can occur right under people’s noses. While working in the Kyrgyz Republic several years ago, he and other researchers found a tick-borne encephalitis that had not been discovered before.

“It was in a national park at the northern end of Himalayas,” Baker said. “Really, a great place to hike and work. We asked our colleagues to go to the hospital and ask if they were finding people bitten by a tick that were sick. Our colleagues asked people at the local hospital, and they said ‘Yeah, there’s a guy in here today bitten by a tick and he’s really sick.’ Our team was able to get blood samples for him and they proved to be positive for this new tick-borne encephalitis. He died about two weeks after that. We knew there was a huge outbreak of virus in this guy. They had no idea this virus was present there. We need to do a lot more work and find out where viruses are and where they’re carried.”

That’s what Bradley and viral expert Charles Fulhorst at the University of Texas Medical Branch at Galveston are doing currently.

He agreed that more research is needed to know what diseases may lay waiting for the right circumstances.

“I think the hantavirus research was the tip of the iceberg,” Bradley said. “We had a lot of virologists and field biologists together, and they questioned if this hantavirus is in our back yard, what else may be out there. The ’90s were a time of a lot of survey work.”

Taking Heed of the Warning

In South America, arenaviruses are virulent, often targeting the victim’s kidneys and sometimes the brain and lungs. Fatalities are high, and woodrats are known to carry the disease.

But in North America, the disease is not virulent and seldom fatal, he said. He and Fulhorst are looking in the samples of the NSRL to see what North American arenaviruses might be lurking in the tissues that might be useful in treating the more deadly strains, or might be deadly and currently unknown. Bradley and Fulhorst are using some of the same techniques and later technologies that came from the hantavirus outbreak to keep an eye on arenaviruses. 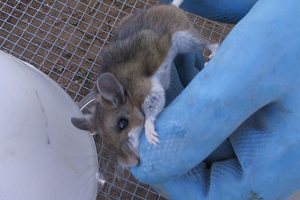 A picture of the type of deer mouse that carried hantivirus.

“It turns out we had a lot of samples sitting around in the freezer that contained a lot of new viruses,” he said. “We started a screening process in different states to see what we could turn up. We found them in specimens from Texas, New Mexico and throughout Mexico and turned up a few in Arizona. Right now, we’re describing a new arenavirus from the Dickens area. It was here and we didn’t even know about it until we started looking for it.

“I think one of the major focuses of CDC and NIH is to support research and general survey work so we can see what’s out in natural environment, so we do have a history of these diseases, and we do know if it’s something new or been out there 30, 40 or 50 years. Viruses are always evolving as fast as they can, so staying on top of them is a very important thing to do.”

Knowing what’s out there and where it comes from may become even more important as human encroachment into rainforests and rural areas not typically inhabited by people may unintentionally put them in harm’s way. Hollywood has made several movies featuring an outbreak of a deadly virus, Bradley said. But the possibilities portrayed on the screen aren’t far from what might actually occur.

“As rainforests are being cut down and towns and communities are expanding, people are coming into contact with rodents they haven’t been in contact with in previous history,” he said. “Think of all the commerce and people moving around. People on airplanes. People fly from Asia to Europe and North America and within days, the flu arrives in our back yard. In a matter of days you could have a disease spread worldwide. The CDC worries about that.”