Reneé Flournoy and Madison Taylor are set to graduate from Texas Tech – together. 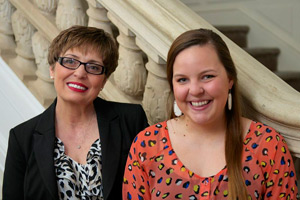 Reneé Flournoy and her daughter Madison Taylor will both graduate from the College of Human Sciences.

When Madison Taylor’s mother told her she wanted to go back to school, Madison said she was crazy.

This week, the pair will graduate together from Texas Tech University’s College of Human Sciences.

Taylor and her mother, Reneé Flournoy, are both from Lubbock and each grew up with a love for Texas Tech.

“I always knew I wanted to go to Texas Tech, it would have been too hard to go anywhere else,” Taylor said.

Taylor was surprised when, two years into her own undergraduate career, her mom told her she wanted to go back and finish a degree she began in the 1970s.

After graduating from Cooper High School, Flournoy began at Texas Tech in 1978 in elementary education. Realizing she didn’t want to be a teacher, Flournoy did not finish her degree.

However, when she saw her daughter excelling at Texas Tech, she felt a desire to accomplish her long-standing goal of attaining a college degree.

“I thought, all the kids Madison’s age are doing well, I could do that!” Flournoy said.

Flournoy enrolled in the general studies program in the College of Human Sciences. She and her daughter, who is a Restaurant, Hotel and Institutional Management (RHIM) major, have taken many of the same classes, although never at the same time.

“It’s funny that we never had a class together, but this year she had a class with two of my friends from high school,” Taylor said.

The two have ended up with many of the same friends through classes and learned study tactics from each another.

As a non-traditional student, Flournoy said she has benefitted from her experiences with students her daughter’s age, turning them into lasting friendships. After attending class with Eric Stephens, a running back for the Red Raider football team, she ended up becoming friends with Stephens’ family, including his infant daughter.

The friendship spawned a business idea for Flourney: creating tiny jerseys for infants to wear. She plans to expand the idea to create jerseys and cheerleading uniforms for infants and children, a related enterprise to the family business, California T’s.

“I never would have had the idea if I hadn’t been in class and made friends with the kids here,” Flournoy said.

“I’m so proud of her,” Taylor said. “I can’t imagine going back to school that much later in life. I’m impressed.”

For Mother’s Day, they plan to go out to eat with one of Flournoy’s friends she met during her original stint at Texas Tech. She says she has inspired several friends her own age to go back and get a degree from Texas Tech.

The pair will be joined by their extended family and friends this week for commencement activities. Together, they will be first-generation college graduates.

“My dad is a huge Texas Tech fan, and always has been,” Flournoy said. “I know this means a lot to him. He is so proud of us.”

After graduation, Taylor will leave her mother to pursue job opportunities in North Carolina. For now, the two are glad that the hard work over the last few years has paid off.

“It’s a fun life, although it’s a different kind of fun than it was back then,” Flournoy said. “Learning so much has been wonderful.”