Texas Tech's Rawls College of Business joins only 40 other universities nationally to house such a school. 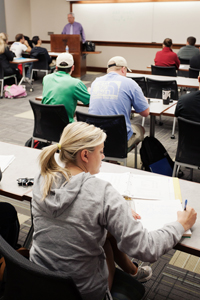 According to Robert Ricketts, coordinator for accounting at the Rawls College, there are about 40 accounting schools nationwide and only one separately accredited school in Texas, as a push to create these schools in the 1970s and 1980s was quashed in the Texas Legislature.

“Texas Tech and the Rawls College is the second Texas university to make another run at it, and with the board’s approval today, we’ve accomplished this,” Ricketts said.

Ricketts pointed out that the Area of Accounting is the only one in the college that holds AACSB (the Association to Advance Collegiate Schools of Business) accreditation separate from the college itself, as it is accredited through a parallel process with a higher standard for dually-accredited accounting programs.  The designation of being a school rather than an area will further distinguish it from the other areas of study in the college.

“This is a huge milestone for our accounting program that recognizes the excellent education and thought leadership emanating from the area,” said Lance Nail, dean of the Rawls College. “When you realize that fewer than 500 of the approximately 1,600 US business schools are accredited by AACSB and that only 168 of those accounting programs have met the standard for separate accreditation, you realize that our program is already a prestigious one. Elevating our program to a School of Accounting attaches an elite status to our program that it has earned through years of outstanding graduate placements, high CPA pass rates and impactful faculty scholarship.”

The 2011 CPA exam pass rate for Rawls College graduate student first-time test takers was 69 percent, second highest of accounting programs in Texas. Current enrollment in the accounting area is about 290 juniors and seniors, and close to 200 graduate students.

“I am very pleased to see this initiative coming from the Rawls College leadership,” said Bob Smith, Texas Tech’s provost. “The creation of a School of Accounting – based on existing strengths and recognition – represents the type of development that will help Texas Tech meet its most ambitious goal—becoming a Tier One institution.”

Ricketts said the new designation will require no additional administrative costs and the school would still be part of the structure of the Rawls College.