Texas Tech bests 13 teams from across the country. 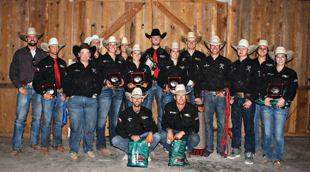 Texas Tech’s team members from the College of Agricultural Sciences and Natural Resources competed in three divisions, Non-Pro, Limited Non-Pro and Novice. The team members ranked among the top ten slots in every division, aiding them to their national victory. National High-Point and Reserve High-Point earners included:

Completing the team are:

“I am extremely proud of how everyone did during the weekend, both in and out of the show pen,” said Cooper Cogdell, Ranch Horse Team coach. “They did a great job of representing Texas Tech and really came together with all their hard work to pull off this national championship.”

As the spring season comes to a close, the team will host a Stock Horse of Texas (SHOT) show Friday and Saturday (April 26-27) in Lubbock, where the members will compete together as a team for the last time during the spring season. The team also will host a Ranch Horse Association of America show April 28. Other members will go on to represent Texas Tech at the Western Heritage Classic in the beginning of May.

Additional team and individual results can be found at amercanstockhorse.org. For more information, visit tturanchhorseteam.com.