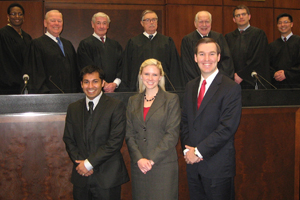 Reagan Marble of Jourdanton, Ashirvad Parikh of Kingwood and Suzanne Taylor of Arlington defeated perennial contender South Texas College of Law in the final round of the competition, taking six of seven ballots from a panel that included six federal district court judges and one judge from the U.S. Court of Appeals for the Seventh Circuit.

"Congratulations to Reagan, Ash and Suzanne on this incredible accomplishment," said Robert Sherwin, director of advocacy programs and team coach. "They have won the largest, and arguably most prestigious, moot court competition in the country."

Law School Named One of Nation's Most Transparent