Film hits home run with moviegoers, but could it send wrong message to African-Americans? 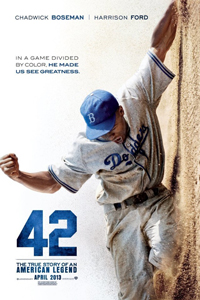 Biopic about Jackie Robinson, the first African-American to play in Major League Baseball.

The new Jackie Robinson biopic (“42”) has hit a home run with moviegoers, raking in more than $53 million in its first two weeks at the box office.

But a Texas Tech University assistant professor suggests that the film’s mass appeal could also send a wrong message to the African-American community, especially to the children who are just now being introduced to the important sports figure.

“What you see in the film is Jackie Robinson, who is athletically gifted and a gentleman, but in order for him to desegregate baseball, he has to endure injustice peaceably and with a smile,” said Karlos Hill, who specializes in African-American history. “That idea of turning the other cheek is something that’s not threatening, easily digestible and something people can rally behind.

“But what’s the cost of that narrative?”

Hill points to one scene in particular, when Robinson goes up to bat and is taunted by the opposing team’s manager. Robinson clenches his bat in anger and is about to confront the coach before thinking better of it. A teammate ultimately comes to his defense and challenges the manager, but Robinson still strikes out during the at-bat. As he heads back to the dugout and clubhouse, Robinson collapses due the emotional stress.

“By allowing himself to be insulted, Robinson was, in essence, emasculated,” Hill said. “As human beings, we all demand respect, but he couldn’t do that. The film gestures toward that struggle but, ultimately, it doesn’t show the tremendous trauma that was exacted on him for being the martyr. We must remember that this is just one version of Jackie Robinson — the version that’s most palatable and the version people can unite around.”

Hill said he wonders what kind of effect presenting this version of Jackie Robinson will have on younger moviegoers. While Robinson’s non-violent approach should be applauded, Hill said he also doesn’t want children to think they have no voice when it comes to racial injustices.

“I’m not sure the Jackie Robinson presented in this movie is the right role model for today,” he said. “That’s not to take away from anything he did. He fought those battles, he endured that discrimination, and it took a super-human ability to endure that. But I’m not sure that it is healthy to teach that type of complacency today.”

In fact, Hill says “42” turns out being a film more about the Civil Rights movement and how it should be remembered, than Robinson. Hill isn’t surprised Hollywood producers would focus on that narrative, especially at a time when the country’s first African-American president still is in office.

“The movie wants you to remember the Civil Rights movement as this struggle in which valiant honorable middle class African-Americans, through the force of personality and through the patience of Job, were willing to endure suffering in order to become equal members of American society,” Hill said. “Obama has taken that narrative and wrapped himself in it. Americans are ripe for this type of movie, because they’ve been hearing about this the past six years.”