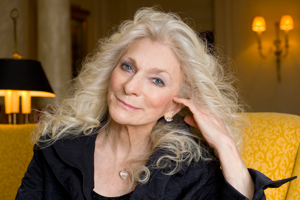 Judy Collins, the Grammy Award-winning and Academy Award-nominated folk singer, songwriter and author, makes her next stop at Texas Tech University as she performs for the Presidential Lecture & Performance Series.

Her career spans more than 50 years with more than 40 recorded albums – some reaching gold and platinum status. She received a Grammy Award for Best Folk Performance in 1968 and won Song of the Year for her version of “Send in the Clowns” at the 1975 Grammy Awards.

“I certainly do have plans for the future,” Collins said. “I just keep doing what I am doing. I am making television shows, touring about 120 shows a year, and writing books.”

In addition to singing and song-writing, Collins expresses her creative talent in her nine books, as well as in the film she co-directed, “Antonia: A Portrait of the Woman.” The Academy Award-nominated film focuses on Antonia Brico, who was the first woman to conduct major symphonies around the world, as well as Collins’ classical piano teacher when she was young.

Collins also made an appearance on HBO’s television show “Girls,” as well as starred in her own television show, “Judy Collins: Live at the Metropolitan Museum in New York,” which currently is airing on PBS.

Books and CDs will be available for sale at the event.

Prior to the event, the Presidential Lecture & Performance Series is partnering with the Women’s Studies program for a roundtable discussion from 2 to 3 p.m. April 12 in the Texas Tech Library Teaching, Learning and Professional Development Center (TLPDC), located in Room 153 of the library. Collins will speak about her experience with social activism in the past and present, especially in regard to women. She will also focus on the way the arts can be used to promote social justice. Register on the TLPDC website to attend the event.

General admission tickets for her evening show are $15 and are available through all Select-A-Seat locations. Call (806) 770-2000 or visit www.selectaseatlubbock.com. Texas Tech students receive one free ticket with a valid ID at the Student Union Building information booth located at the entrance to the Allen Theatre of Texas Tech.

Community outreach for this program was funded in part by the Sybil B. Harrington Endowment for the Arts of the Lubbock Area Foundation.