From Birdie to Bogey: How Stress Affects Your Game 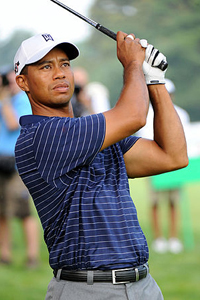 With the Masters underway in Augusta, Ga., Tiger Woods is once again ranked the No. 1 golfer in the world and is a favorite to win the green jacket this year.

Few can argue that Woods has phenomenal talent, but Texas Tech University professor of exercise and sport psychology Marc Lochbaum, says Woods’ return to the top probably has more to do with his personal life.

“I’d say because it has quieted down for him,” Lochbaum said. “Once they (golfers) quiet down the stress or the noise and can get back to their routine, then they can continue.”

It has been more than three years since Woods’ fall from grace amid stories of his marital infidelity. He struggled during the turmoil, going winless in 2010 and 2011, and dropping from No. 1 to No. 128 in money-list rankings.

But Lochbaum says it has more to do with the game and not so much the player. In other sports, when the player is under pressure they instinctively know what their next move should be.

“You only have so many resources to allocate, like paying attention to doing the skill correctly to thinking about ‘what if I miss?’ There are only so many resources,” Lochbaum says. “You need to have all of them on automatic pilot, so you just do the skill.”

Golfers don’t have that luxury. No round is ever the same, each one producing a variety of possible shots, which allows more time for a player’s thinking to get in the way of his playing.

“Golf, unfortunately, allows you to stand there and start thinking about it and then your attention gets diverted,” Lochbaum added.

So as you watch the final round of the Masters on Sunday, remember just how much is riding on that little white ball.

“It’s got to be the only sport where one stroke is literally worth half a million dollars,” says Lochbaum. “So the difference in your life is enormous.”