The building now serves as the home for the Department of Mathematics and Statistics. 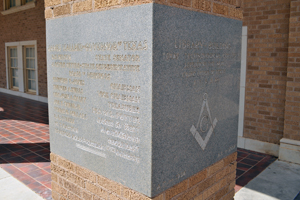 The cornerstone of Texas Tech's first free-standing library was laid on March 8, 1938 – 75 years ago.

This week is the 55th Annual National Library Week.  What better way to commemorate it than by recognizing the 75th Anniversary of Texas Tech University’s first free-standing library?

Texas Tech has seen steady growth since it was created 90 years ago.  And its library has shared in that growth by having three different locations.

When Texas Tech opened its doors in 1925, its library was housed in the west wing of the Administration Building; and, according to articles in the university archive, contained around 10,000 books.

On March 8, 1938, the cornerstone was set for the new library – officially named the James V Allred Library.  This was the first major educational building built since the college opened nearly 13 years prior.  The old library is now the Mathematics and Statistics Building. 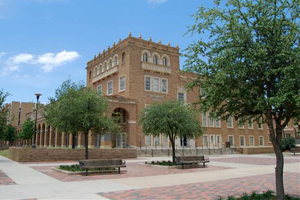 The old library now serves as the Mathematics and Statistics Building.

According to the Daily Toreador, there were 5,000 invitations sent out for the cornerstone ceremony.  Governor Allred was on hand to give a speech, as well as Texas Tech president Bradford Knapp.

A copper safety box was placed inside the cornerstone.  The box was filled with things significant to Texas Tech, city and state: autographed scroll of employees and faculty of the college, copies of the Daily Toreador and Lubbock Avalanche-Journal, a 1937 La Ventana, a Lubbock telephone directory and recently issued coins.

The new library was open for students in the fall of 1938.  The librarian at the new building was Elizabeth Howard West.

The library stayed at this location until its current location was dedicated in October 1962.