In what was a whirlwind year for the mascot Raider Red, including the Capital One Mascot Challenge Championship, two of the students serving in secret finally revealed their true identities as Texas Tech University honored them for their service.

Zach Bohls and Geoff Waller transferred their duties to new students Friday during the eighth annual Passing of the Guns Ceremony.

With his red mustache and floppy white hat, the swaggering Raider Red is a symbol of Texas Tech spirit and pride. He was designed in 1971 by Saddle Tramp Jim Gaspard based on the illustrations of Lubbock cartoonist Dirk West.

“I would like to thank Zach and Geoff for their dedication and service to the Raider Red Program and Texas Tech University,” said Bruce Bills, cheer and mascot coach. “They both have done an exceptional job representing Texas Tech and have made a lasting impression.”

Bohls, a public relations major from Austin, appeared as Raider Red more than 350 times in the three years he spent in the suit, head and boots.

“Being part of this elite ‘furr’-ternity of Raider Reds has showed me how blessed I am,” Bohls said. “It has given me the absolute best relationships I ever thought I could have. The program has opened so many doors for me, and I hope that I gave as much as they did me.” 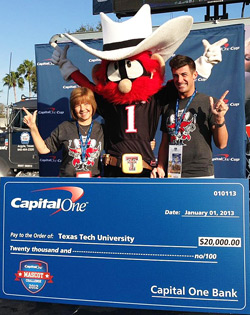 As the most experienced “Red,” he was tapped to travel to Los Angeles to do all of the publicity material for the Capital One national mascot of the year contest, including photo and video shoots with other universities’ mascots. His costumed likeness became Texas Tech’s presence in the semester-long voting competition, which netted $20,000 for the mascot program with the victory.

“The California trip for Capital One was the most fun I had as Red,” Bohls said. “It was unbelievable to go three years as Raider Red. Because of the mascot contest and the many appearances to support it, senior level courses, and another one of us having injuries, it was extremely hard to manage my time. Winning the Capital One Mascot Challenge for Texas Tech was worth it.

If not for his brother, Bohls may not have ended up at Texas Tech in the first place.

“Tyler was the only one in the family to graduate from Texas Tech. He was definitely the glue to stick me to coming here,” he said.

Waller, a history and political science double major, with a minor in European Studies, is from Lubbock and served as Raider Red for two years.

His favorite memory, he said, has to be riding the motorcycle out into Jones Stadium for the first time ever.

“This year has been way more hectic than normal with the Capital One competition on top of our usual appearances,” Waller said. “While it was crazier and more hectic, it was also a lot more fun to be part of the program with so much attention on us at all times. Having to do all those extra appearances was definitely worth it to see us win first place!” 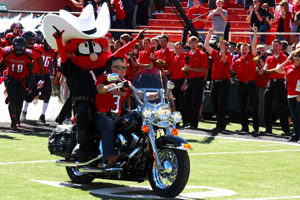 Waller leads the Texas Tech football team onto the field while riding a motorcycle.

By “extra appearances,” the number nearly doubled from the average in the fall 2012 semester while the Capital One challenge was in progress. Raider Red typically averages 150 appearances for an entire year. In the fall alone the three students had 111 appearances August through December, and nearly 50 more already for spring.

Waller is the product of a family deep in Red Raider tradition.

“Both of my parents, my grandparents, and several aunts, uncles and cousins attended Texas Tech,” Waller said. “Because of this, I have been surrounded by the Tech traditions from the day I was born. I had season tickets to football games with my aunt for about 12 years before I enrolled as a student at Texas Tech. With all of the Tech spirit surrounding me, it is no surprise that I ended up going to Texas Tech.”

Open to Saddle Tramps and High Riders, four students will take on the duties of Raider Red for the coming year.