With two national third-place finishes and a national mascot championship, Texas Tech University’s spirit program has had quite a memorable year.

Stephanie Rhode, director of the spirit program, said both teams achieving such high marks under first-year coaches was no small feat.

“This is Erin’s first year as pom coach and Bruce’s first full year as the cheer coach, so we’re thrilled that they’ve had this level of success,” Rhode said. “We’re also very proud that the spirit program has two top-three squads in the nation and our mascot is also number one in the same year. I don’t know of another program in the country that can top that.”

The cheer squad, coached by Bruce Bills, competed in the Division 1A Large Co-Ed Cheer category against eight other teams. The team finished with a final score of 92.7, and was edged out by squads from Oklahoma State University (first) and the University of Louisville (second).

“This team fought hard all year long,” Bills said. “The drive and dedication they put into making this routine hit in a way to represent Texas Tech was amazing to watch and coach.

They stepped up and supported each other each and every day. To the seven graduating seniors, words cannot express my gratitude and appreciation for their leadership and commitment to this program over the years. We will continue their legacy and be back next year.” 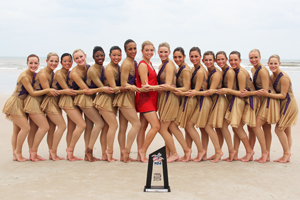 Erin Harold’s pom squad’s third-place showing out of 15 dance teams in its division was quite an accomplishment, considering the top three teams were separated by only .21 points.

The pom team’s finals score was 9.565, barely beaten by Brigham Young in first and Purdue in second.

“Judges loved our routine and were so happy to see something different,” Harold said. “I am so proud of the girls, I know a lot of people weren’t expecting them to go down there and perform as well as they did. Many people from several other teams were telling them how much they loved their dance and thought it was amazing. They are all so excited to get back and start training for next year.”

Nearly 300 teams in 29 divisions from across the U.S., Canada, Costa Rica and Japan competed for an NCA or NDA title.