Kai Zhang will study a microscopic parasite responsible for a tropical disease. 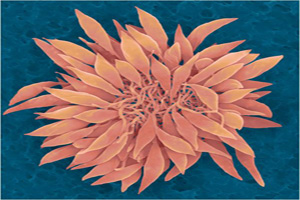 The parasitic Leishmania protozoa live in the fly’s gut and can cause anything from itchy skin irritation or disfiguring ulcers that take months or years to heal to a deadly attack on the body’s organs. (Photo courtesy of Nature Biotechnology.)

A Texas Tech University biology professor received a five-year, $1.6 million grant from the National Institutes of Health to study the biochemistry of a microscopic parasite responsible for the tropical disease leishmaniasis in the hope of finding a cure.

Kai Zhang, an associate professor in the Department of Biological Sciences, said he will use the funds to study a lipid produced by the protozoa Leishmania to discover a weakness in the armor of the sometimes deadly parasite, estimated in World Health Organization literature to cause the ninth largest disease burden among individual infectious diseases.

“Leishmaniasis is one of those neglected tropical diseases,” Zhang said. “We’re trying to identify a weak link and go from there. If this eventually leads to a new cure, that’s a bonus. But even if it fails, it doesn’t mean the work is useless.”

Common in areas such as South America, the Mediterranean, the Middle East and Southern Asia, the disease is endemic to 88 countries. It’s transmitted by a sandfly, which is about a third of the size of a mosquito.

The parasitic Leishmania protozoa live in the fly’s gut and can cause anything from itchy skin irritation or disfiguring ulcers that take months or years to heal to a deadly attack on the body’s organs.

The World Health Organization estimates about 12 million people are infected with cutaneous, mucosal or visceral leishmaniasis with 2 million new cases each year. Severity of the disease is dependent on what species of Leishmania that infects a person and the host’s genetic makeup, Zhang said. Sometimes, it’s not so much what the parasite does to the human host that causes the damage as much as the immune system’s response.

About 80 percent of the time, the infection causes lesions on the skin. This less virulent type is found throughout the world in tropical and sub-tropical areas. Less common mucosal leishmaniasis tends to affect the mucosal areas of the mouth, nose and pharynx and can cause severe disfiguration. This form occurs mostly in South and Central America.

Searching for a Cure

The Institute for OneWorld Health estimates that, worldwide, about 500,000 people each year contract visceral leishmaniasis, the most deadly form of the disease. More than 90 percent of these cases happen in India, Bangladesh, Sudan, Brazil and Nepal. If untreated, the disease is nearly always fatal.

Part of the problem, Zhang said, is that no safe vaccines exist, and the few treatments for infected patients are outdated and even toxic.

“Right now, there’s no sure cure,” he said. “We have antimony-based compounds as the frontline drugs. But, they’re dangerous and have been used for more than 50 years. They have to be administered by injection and have strong side effects.  Also, Leishmania have developed resistance to these drugs. Alternative drugs include pentamindine and Amphotericin B, which are expensive and difficult to administer. So far, the only effective oral treatment for leishmaniasis is Miltefosine.” 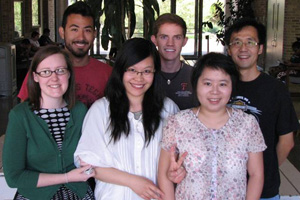 Zhang, back right, and members of his lab.

Leishmania seem to only produce one type of sphingosinekinase, he said. Animals such as mice produce two, but can survive with only one. Zhang hopes to find a drug that could inhibit the protozoa enzme, thereby killing the parasite while leaving one of the two host enzymes intact to continue normal cell function.

“My lab studies Leishmania and how this pathogen causes disease,” Zhang said. “Right now, we are looking at lipids, which are fairly under-studied because, in the past, people have thought lipids are just building blocks for the cell membrane. They’ve concentrated on proteins, nucleic acids and carbohydrates. That’s changed in the last 10 to 20 years. Ultimately, we would like to develop a safe, effective vaccine and new drugs. So far, the most low-tech, yet most cost-effective way to deal with Leishmania is to avoid getting bitten by sandflies.”

While the diseases currently are contained to developing nations in tropical or sub-tropical areas, global climate change, deforestation, human encroachment and human migration may cause these diseases to thrive in other parts of the world such as the United States and Europe, he said.

“On one hand, we’re trying to understand the reason why certain proteins or lipids in Leishmania are important to infection,” Zhang said. “On the other hand, we’re trying to see if we can we use that knowledge to generate new therapeutics. Right now, the major challenge is the translation of the data from basic research like what we are doing in my lab to something that can be used in clinics, such as a new drug or vaccine.”