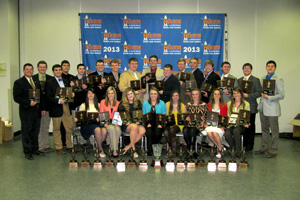 “I’m very proud of the commitment of these students this spring,” said Mark Miller, Horn Professor and San Antonio Livestock Show Distinguished Chair in Meat Science. “We are very blessed to have such a large and deeply competitive team this year.”

This was the last contest of the spring for the 2013 team. Next fall they will compete at four more contests. The team will also host contests and workouts this spring and summer at Texas Tech for 4-H and FFA students from across the United States.