Chau-Chyun Chen is one of three National Academy members on faculty. 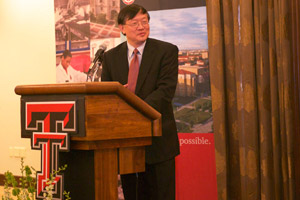 Chancellor Kent Hance of the Texas Tech University System has announced the appointment of Chau-Chyun Chen as the new holder of the Jack Maddox Distinguished Engineering Chair in Sustainable Energy.

Chen was introduced Tuesday at a news conference and reception at the McKenzie-Merket Alumni Center. The event also included remarks from Interim President Lawrence Schovanec; Al Sacco Jr., dean of the Whitacre College of Engineering; and Jim Maddox, of the J.F Maddox Foundation of Hobbs, N.M.

“On behalf of the Board of the J. F Maddox Foundation and the Maddox family, I would like to express my great appreciation to the university, Dr. Schovanec and Dean Sacco, for their commitment to excellence in the search process to attract Dr. Chen to Texas Tech,” Maddox said. “Jack Maddox (’29), our founder, would be extremely pleased to know the chair named in his honor will be held by such an outstanding researcher and leader in this field.”

Chen is one of three National Academy members on faculty at the Texas Tech’s Whitacre College of Engineering. Election to the National Academy is considered one of the highest professional honors among engineers. Chen was elected in 2005 for his contributions to molecular thermodynamics and process modeling technology for designing industrial processes with complex chemical systems.

“I am extremely proud to add another National Academy member to the Texas Tech University faculty," Hance said. “This is one of numerous examples of the outstanding progress being made at our university, and I look forward to Dr. Chen’s contributions to our already esteemed engineering program.” 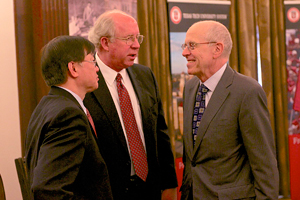 Chen received his bachelor’s degree in chemistry from the National Taiwan University in 1973, and his master’s and doctoral degrees in chemical engineering from the Massachusetts Institute of Technology in 1977 and 1980, respectively. He has published more than 100 scientific articles, book chapters and patents.

Previously, Chen served as vice president of technology at AspenTech, a company he co-founded. He was responsible for science and technology innovations in AspenTech’s process modeling business area. He is best known for his development of the electrolyte NRTL activity coefficient model widely used for modeling electrolyte solutions.

Awards for Chen include the 2001 Computing Practice Award, Computing and Systems Technology (CAST) Division of the American Institute of Chemical Engineers (AIChE), and the 1984 Ted Peterson Student Paper Award also from CAST Division of AIChE.

“I am looking forward to the extraordinary opportunity ahead of me and ahead of us,” Chen said. “By joining this community of scholars at Texas Tech University, I look forward to discovering and also sharing new knowledge for the goodness of humanity.”