Research finds that fish could be the first animal discovered that is capable of such tactics.

Pirate perch aren’t really perch at all, but related to the Amblyopsid cave fish family.

It’s a nocturnal aquatic predator that will eat anything that fits in its large mouth.

Dark and sleek, it hides beneath the water waiting for prey. A Texas Tech University researcher says the target will never know what hit them because they probably can’t smell the voracious pirate perch.

After careful investigations, William Resetarits Jr., a professor of biology at Texas Tech, and Christopher A. Binckley, an assistant professor in the Department of Biology at Arcadia University, found that animals normally attuned to predators from their smell didn’t seem to detect the pirate perch. It could be the first animal discovered that is capable of generalized chemical camouflage that works against a wide variety of prey.

The team published their findings in the peer-reviewed journal The American Naturalist.

Thankfully, at five-and-a-half inches long, only insects, invertebrates, amphibians and other small fish need worry about the danger hiding near the bottom among the roots and plantlife, Resetarits said.

“We use the term ‘camouflage,’ because it is readily understandable,” he said. “What we really are dealing with is some form of ‘chemical deception.’ The actual mechanism may be camouflage that makes an organism difficult to detect, mimicry that makes an organism difficult to correctly identify, or cloaking where the organism simply does not produce a signal detectable to the receiver.”

Resetarits said pirate perch aren’t really perch at all, but related to the Amblyopsid cave fish family. Fossils from this fish date back about 24 million years ago.

They make their homes in freshwater ponds and streams in the Eastern United States. Once considered for the aquarium market, the fish got its name because of its penchant for eating all tank mates.

“Pirate perch have some unique aspects to their morphology and life history, but they are generalist predators, and so should have been avoided by prey animals like all the other fish tested,” he said. “For some reason, they weren’t avoided at all.”

To test their theory, Resetarits and Binckley ran a series of experiments in artificial pools housing 11 different species of fish, including pirate perch.

The fish were kept at bay at the bottom of the pools with screens so that they could not prey on the beetles and tree frogs that colonized the water.

When it came to choosing a pool, the beetles and frogs consistently steered clear of the water with other fish species in them, most likely because they could smell the presence of fish in the water. However, they had no qualms about moving into pools containing the pirate perch.

“We were incredibly surprised,” Resetarits said. “It took a while for us to pull this all together. When we first observed it with tree frogs, we were very surprised and puzzled. But when the same lack of response was shown by aquatic beetles, we were quite literally flabbergasted. We continued to do experiments with other fish and always got the same results. All fish except pirate perch were avoided.” 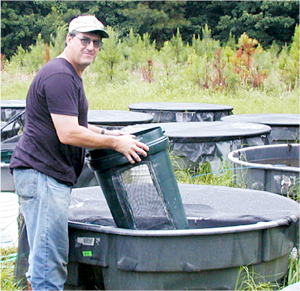 Resetarits next wants to determine how pirate perch are either scrambling chemical signals or masking their odor.

Exactly what the pirate perch is doing to hide isn’t yet known, he said. Researchers want to determine how the pirate perch are either scrambling chemical signals or masking their odor. Once they have identified chemical compounds that might explain the behavior, they will return to the field to test with the same tree frogs and beetles as well as other organisms known to respond to fish chemical cues, such as mosquitoes and water fleas.

“We will also test whether this chemical deception works against the pirate perch’s own predators,” Resetarits said. “Of course, other critical questions that we are working on include just how much advantage in terms of prey acquisition do pirate perch gain as a result of chemical deception. Does this phenomenon occur in closely related species, such as cavefish? Are there prey species that have found a way around the chemical deception?  There are many questions now, and I think we have just scratched the surface.