Professors of the Pavement

Texas Tech faculty and staff receive many benefits from their start-up running group. 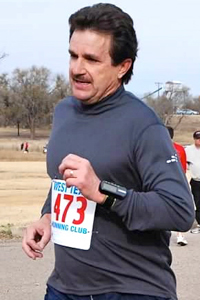 Every morning, usually around 6 a.m., Jerry Dwyer arrives at 20th Street and Elgin Avenue. Anywhere from two to 15 people meet him there for at least a 5-mile run through the Tech Terrace neighborhood and Texas Tech campus.

The group, known as the “20th and Elgin Runners,” is made up of members of the Lubbock community and Texas Tech faculty and staff. They formed when Texas Tech Provost Lawrence Schovanec first recruited Dwyer, associate professor of Mathematics, to Texas Tech in 2003.

Since then, they have formed a bond that provides health benefits—both physical and mental—and a unique camaraderie that goes outside the classroom.

“There’s a certain problem-solving approach to running that I think appeals to members in the academic profession,” Schovanec said. “Take a marathon, for example. There’s an optimization problem: you really don’t have enough energy stores to complete that race. And you have to be very strategic. You have to be concentrating, you have to be watching every mile, you have to watch your heart rate…running is a scientific process.”

Dwyer said he and Schovanec found a common interest in running after they began working together in the math department.

“We realized we were both runners, so we just started running together,” Dwyer said. “It was just the two of us for about a year, and then we met a couple of others.”

Dwyer joked he would be listing half of Texas Tech’s entire faculty if he mentioned everyone who had joined the 20th and Elgin group for a run. However, the most regular members aren’t just recreational runners. At more than 10 hours and up to 80 miles per week, several faculty members could be considered elite athletes. 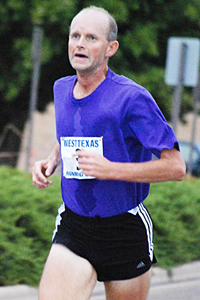 Several have qualified for and run the Boston Marathon, the world’s oldest annual marathon with arguably the most elite competition.

“We’ve probably had seven or eight people who have qualified this year,” Dwyer said, with a shrug. “The time isn’t terribly demanding for some people. I ran Boston when I lived in Boston.”

As casual as Dwyer and his colleagues treat their accomplishments, it may seem unusual that so many professors travel more miles by foot in a week than they travel by car.

For Dwyer, who serves as the group’s de facto leader and whom others point to as the most passionate toward running, the exercise benefits his time spent doing scholarly activities.

“I actually think you can ‘work’ on a run, especially on mathematics,” Dwyer said. “You can think about stuff, you can work stuff out if you run easily at the same time. You get an insight to things just by being out there.”

While the 20th and Elgin Runners also consists of people who are not affiliated with Texas Tech or academics, the bond many share as Texas Tech faculty members has helped make the group’s friendships especially strong.

“It is a great opportunity to combine exercise with brainstorming on teaching and research, group therapy sessions, political debate and updates on future running events,” Paré said. “And during the semester, we get it all done before heading off to an 8 a.m. biochemistry class.”

Cohen, who ran competitively in high school and college before taking more than 10 years off, returned to running by getting involved with the WTRC. With the encouragement of Dwyer and Schovanec, Cohen completed his first marathon: the Oklahoma City Marathon, which the three colleagues ran together. Cohen has since ran the Boston Marathon twice.

“As a faculty member it’s really neat,” Cohen said. “You don’t usually get a lot of interaction with people in other departments. But we get to be around people from math, dance, engineering, geosciences…there’s somebody in almost every discipline. And of course there are other people who run with us that aren’t related to Texas Tech, and that’s neat too. It just turned out to be a very interesting group to run with.”

The faculty runners, many of whom have positions in the sciences, point out that due to their professions they are often hyper-aware of the health benefits to running, and exercise in general. 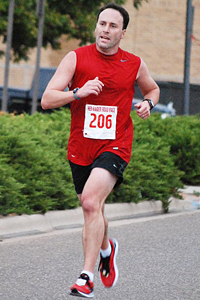 Durham, a faculty member in dance, says that running is a natural complement to her profession.

“It helps to maintain a fitness level that supports what I do in terms of teaching, choreographing and performing,” Durham said.

As a professor of biochemistry, Paré agrees, and points out that running provides mental benefits as well.

“I am very much of the belief that a healthy body complements a productive mind,” he said. “An early morning run helps me be alert during the day and sleep well at night.”

While the faculty members see running as a health benefit, the task of waking up early every morning isn’t always easy, so it helps that most simply love to run.

“I run for exercise, but more importantly to start each day doing something I enjoy and that helps me clear my mind and think,” Colwell said. “My days go a lot more smoothly when I start them with a run.”

The love of running brings together the group each morning. But Dwyer’s enthusiasm for the sport keeps the group going even when temperatures fall below freezing and daylight saving time causes them to lose an hour of sleep. Dwyer says he once went 8 years without missing a single day of running, although he now skips the day after a trans-continental flight to or from his home, Ireland.

“For some people, it would be hard to get up and run every day,” Dwyer said. “It would be much more difficult for me not to run.”