Part of the added benefit of this new decontamination wipe is that it contains biodegradable cotton. 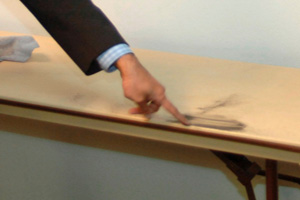 The powdery M291 decontaminant leaves a dirty residue after cleaning.

A new version of Fibertect®, a nonwoven decontamination wipe created by researchers at Texas Tech University, has proven itself more viable at cleaning up a nerve chemical surrogate than the decontamination substance currently used by the U.S. Department of Defense (DoD), which is currently being phased out.

Seshadri Ramkumar, lead investigator on the project and inventor of Fibertect®, said that when compared to the powdered decontaminant called M-291, the all-cotton version of nonwoven wipe paired with an activated carbon center cleaned up not only the chemical surrogate to the nerve gas soman, but also adsorbed its vapors five times better.

The results were published in the peer-reviewed Journal of Engineered Fibers & Fabrics, by INDA – Association of the Nonwoven Fabrics Industry. Experiments in the research were conducted by Utkarsh Sata, a co-investigator on the project.

“The basic structure is still Fibertect®,” Ramkumar said. “This is an improved reiteration of Fibertect®. This is just two nonwoven cotton layers with the carbon in between. The cotton composite takes liquid up very quickly and can adsorb vapors more efficiently than the powdered decontaminant.” 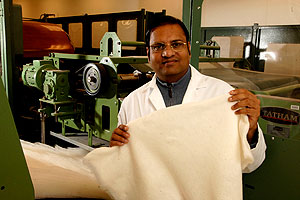 Part of the added benefit of this new Fibertect® is that it contains biodegradable cotton, Ramkumar said. A problem with the powdery form is that it leaves dirty residue.

“That is why the U.S. Department of Defense wants to get away from the powdery form,” he said. “Fibertect® is a fabric. It is skin-friendly. When it comes to adsorbing the surrogate nerve agent’s vapors, it just works better. So the powdered decontaminant will be phased out.”

In 2005, Ramkumar and his team at the Institute of Environmental and Human Health (TIEHH) at Texas Tech studied the absorbent capabilities of cotton to create the Fibertect® wipe that can adsorb and neutralize gases and liquids that might be used in chemical warfare.

“Fibertect contributes to our national security and helps with the safety of our first responders,” Sata said.

The process to make Fibertect® has received a patent and has been validated for use as a low-cost decontamination wipe for the U.S. military and the Department of Homeland Security. Also, the wipe’s qualities were re-engineered to create a better absorbent material to pick up the oil slicks inundating Gulf Coast beaches following the Deepwater Horizon disaster in 2010. 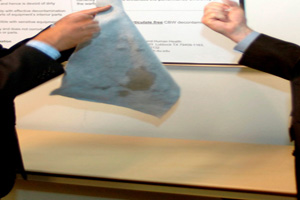 Ron Kendall, a co-investigator on the project, said the creation of Fibertect® began as a need to develop a decontamination wipe system for the human skin, which was a top priority for the Pentagon at the time.

This has resulted now in the invention of Fibertect®, a patent and now commercialization.

The research was funded in part by DoD, Cotton Inc., the International Cotton Research Center, Texas Department of Agriculture, The Cotton Foundation and The CH Foundation.