Luck of the Irish, or Red Raiders?

So how did the Blarney Stone really get to Texas Tech? 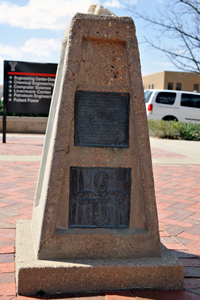 March 17 is a day to celebrate St. Patrick and the Irish culture, and for more than 70 years Texas Tech University has had a small piece of history from Ireland.

On the west side of the Engineering Key, through the arches of the Electrical Engineering Building stands a simple concrete monument topped with a stone that was unveiled to the university on St. Patrick’s Day 1939. According to popular belief, the stone is a piece of the famous Blarney Stone in Ireland — a piece that went missing around the year 1659.

But like the original Emerald Isle artifact, the story of our ‘Bit O’Blarney’ is wrapped in folklore, legend, and perhaps a bit of Texas tall tale.

One fact is certain: the Lubbock Blarney was found on March 7, 1939; but there are three different stories about how it was found.

Red Raiders get the ‘luck of the Irish’ while overseas

A Texas Tech architecture professor at the time, Florian Kleinschmidt, identified the students’ rock as being part of the mythical Blarney Stone; but Mire says Kleinschmidt’s method of identification is unknown.

A gifted geologist locates the lucky loot on campus

“According to Darrel Vines, who was in the College of Engineering in 1998, a geologist found the stone when they were doing excavations here on campus,” said Mire, “he recognized that it had a resemblance to the Blarney Stone.  It was proven to be strikingly similar, if not identical.”

A tired traveler leaves behind an Irish gift for Texas

Mire said the last bit of lore about how Texas Tech got the Blarney involves a traveler, someone exploring through Texas.  They came through the area, dropped off the rock, and continued on their way.  The mystical piece of Irish bluestone remained there until 1939 when it was found by engineering students on a field trip. 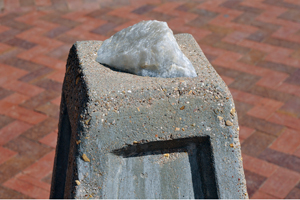 According to tradition, the stone provides eloquent speech to those who kiss it.

No matter how it was discovered, the Texas Tech School of Engineering was excited to have it and had a celebration to dedicate the stone on St. Patrick’s Day, as he is the patron saint of engineers.

“Ten days after the stone was found, engineering students were dismissed from class at 9 a.m. to attend festivities surrounding the monument’s dedication,” Mire said. “There were speeches made, the Tech band played, and it was declared that engineering students, upon graduation, would kiss the Blarney Stone – thereby receiving the gift of eloquent speech.”

Initially, only graduating seniors from engineering could kiss the stone to receive the gift of gab as they went out into the world.  But now anyone can pucker up to get a little luck of the Irish.

“In 1939, Tech was so young they were trying to make traditions,” Mire said.   “This may have just been someone’s idea of something fun to do, and it became a tradition.”