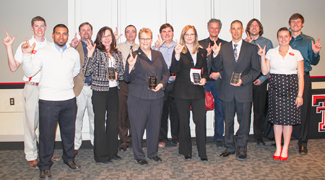 The honorees were recognized with an awards ceremony in the Student Union Building's Red Raider Lounge. (Click to enlarge.)

Created in 2002, the awards are given to outstanding faculty who go above and beyond, both inside and outside the classroom, to impact their students’ learning and academic success.

All award recipients were nominated by students residing on campus and selected by a student committee. This year’s honorees are:

At the ceremony, recipients were introduced by a video of their student nominator explaining why the professor deserves this award.

When he notified the professors they won, Thoroman said their response was overwhelming. He said they understand the significance of the award and take a lot of pride in receiving it.

Kyle Clark, vice president of Administration and Finance, gave the opening remarks during the ceremony and congratulated the award recipients.

“We’re proud of the faculty we have here at Texas Tech,” he said. “These awards provide further recognition of the excellence of our faculty, not only for their knowledge, research and service, but also for their teaching and proficiency in communicating their subjects to their students.”

Clark said the key to Texas Tech’s success is everyone working together for the good of the university, which is exemplified by the partnership between Student Housing and Academic Affairs.

Thoroman also values the partnership Student Housing has with faculty and all the colleges.

'The Big Bang Theory' Star to Speak at Texas Tech