More than 300 guests, including local attorneys and judges, students, faculty and staff attended. 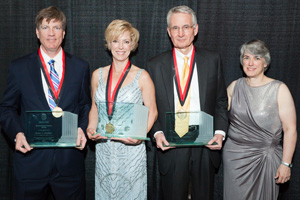 The awards recognize professional and personal commitment to excellence, and contributions to the law school and legal community. More than three hundred guests, including local attorneys and judges, students, faculty and staff, attended this year’s event.

Dawson is a partner in the Dallas office of Gibson, Dunn & Crutcher, where he provides high-profile representation of accounting firms in professional liability disputes, leads trial teams in patent infringement and technology licensing disputes around the country.  He has experience in energy industry lawsuits, white-collar criminal matters and securities litigation.

Dawson received a Bachelor of Business Administration from Texas Tech University before graduating with highest honors from the law school.

Dawson was named Best Lawyers’ Lawyer of the Year for Bet-the-Company Litigation – Dallas in 2011, and has been included in The Best Lawyers in America® for Bet-the-Company and Commercial Litigation from 2003-2013.  He has been named one of seven Leading Individuals in Texas Dispute Resolution by Practical Law Company’s Which lawyer? Yearbook, was recognized as a Super Lawyer from 2003-2012 and named a Local Litigation Star in Texas for IP, Securities Litigation, Energy Law and Professional Liability by Euromoney’s Benchmark Litigation.  He was also named to the International Who’s Who of Business Lawyers in commercial litigation in 2006 and 2008.

Walker was elected to serve on the Second Court of Appeals in 2001. Before her judicial service, Walker was a solo practitioner in civil and criminal appellate law. She is a former adjunct professor of law at Texas Wesleyan School of Law where she taught criminal appellate procedure. In her early legal career, Walker served as a briefing attorney and a staff attorney at the Fifth District Court of Appeals.

Walker attended Texas Tech Law after graduating with high honors from the University of Texas in Austin.

In 2012, the Texas Chapters of the American Board of Trial Advocates honored Walker by selecting her Jurist of the Year. Walker was also named the 2010 Judge Charles J. Murray Outstanding Jurist. She served on the Texas Supreme Court Task Force to Ensure Judicial Readiness in Times of Emergency. She has served as president, counselor and treasurer of the Eldon B. Mahon Inn of Court. In 2009 the Eldon B. Mahon Inn of Court elected her to the Serjeant's Inn of the Dallas and Fort Worth Inns of Court. Walker is also a fellow of the Advanced Science & Technology Resource Center in Washington, D.C, and the Texas Bar Foundation.

Glasheen is an attorney at Glasheen, Valles & Inderman LLP and president of the Texas Tech University School of Law Alumni Association, which he was instrumental in reviving in 2012.

Glasheen represented the family of Timothy Cole, who was wrongfully convicted of a 1985 rape at Texas Tech and died in prison before he was exonerated. Glasheen represented Cole’s family and helped them receive compensation. Since then, Glasheen has represented 12 other clients who were wrongfully convicted like Cole. Glasheen has now teamed up with Bob Pottroff of Kansas to represent victims of a Union Pacific train accident during a parade honoring wounded veterans in Midland.