The university has surpassed the 30,000 mark for the second straight spring. 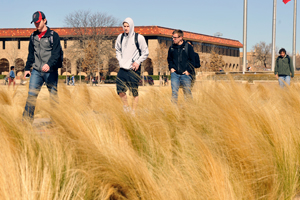 On the rise over the last decade with more than 27 percent growth, enrollment at the university is on course to reach an institutional goal of 40,000 by 2020.

Preliminary spring enrollment totals at Texas Tech have topped the 30,000 mark for the second straight spring semester as 30,399 students are enrolled as of the 12th day of classes (Feb. 1).

The total is ahead of last spring’s record of 30,102 and reflects the university’s commitment to increasing enrollment with quality students and retaining those already enrolled. On the rise over the last decade with more than 27 percent growth, enrollment at the university is on course to reach an institutional goal of 40,000 by 2020.

“Thanks to the dedication of our leadership, staff and faculty, Texas Tech continues to make great strides in our priority of continued growth in both student enrollment and academic quality, and the spring enrollment record is evidence of our recent progress and success.” said Kent Hance, chancellor of the Texas Tech University System. “We take great pride in the increasing number of students who recognize the outstanding educational experience offered and choose to call Texas Tech home.”

The overall spring total marks the largest spring enrollment since the university opened its doors in 1925 and the fourth largest semester total overall. The three largest enrollments occurred during the fall semesters of 2012, 2011 and 2010, respectively. The undergraduate enrollment figure of 24,424 is the largest on record for a spring semester, while 5,316 graduate students reflects an increase over last spring’s graduate enrollment total.

“Texas Tech has become a leading choice of higher education for many talented high school students from across the state of Texas and beyond,” said Lawrence Schovanec, Texas Tech interim president. “While we are pleased with our continued growth, we are doing so by attracting some of the best and brightest students.

“Also, important to note is we are attaining these results following a record 7,015 degrees awarded during the previous academic year,” Schovanec added. “Additionally, the university conferred 2,207 degrees in December, which is ahead of the 2011 fall semester number.”

Behind the Scenes: Raider Roadshow 2013