Cooling speed is key to flexibility and strength in the material. 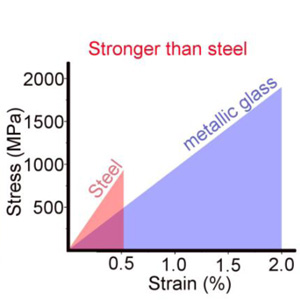 Metallic glasses are stronger than steel.

Researchers at Texas Tech University and Yale University have discovered a way to predict and control the properties of metallic glasses, yielding a highly versatile material that looks like metal, is moldable like plastic, but stronger than steel.

Golden Kumar, assistant professor of mechanical engineering at Texas Tech, and Jan Schroers, professor of mechanical engineering and materials science at Yale University, have developed a model that can explain why some metallic glasses are always ductile or brittle, whereas others are sensitive to processing and aging. The model is based on the metallic glass’ fictive temperature.

Metallic glasses are unique because they combine traits of metals, plastics and glasses in one material. These materials conduct heat and electricity like metals, but their glassy structure makes them moldable like plastics, but hard like glasses. In the process of creating these metallic glasses, it has been difficult to predict the exact properties of the end product, as the materials can be ductile or brittle depending on their composition, sample size and preparation conditions. Despite numerous efforts in the past, no single theory could explain the effect of all of these factors on the properties of metallic glasses.

Metallic glasses typically contain four or five elements, such as zirconium, titanium, copper, nickel, aluminum, platinum, iron and others. However, it is the main element that determines the cost and application. Zirconium-based metallic glasses, for example, exhibit high strength and elasticity, and may be used in sporting goods or military applications, while titanium-based metallic glasses may be considered for precision medical tools because of their biocompatibility.
“The model will help to develop an alloy-specific preparation recipe for obtaining plasticity in metallic glasses,” Schroers said. “This is a crucial step toward predictive models for plastic deformation of metallic glasses.”

Other co-authors who contributed to the study are Pascal Neibecker and Yanhui Liu at Yale.